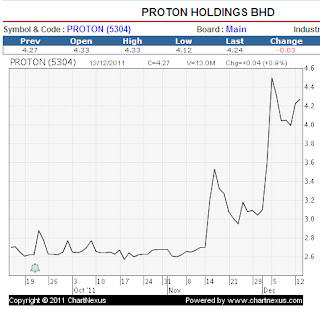 The share price of Proton went hugely up especially in the middle of November and the first days of December. So much that on December 6, 2011 the trading of the shares was halted:
"Kindly be advised that trading in the above Company's securities has been halted with effect from 10.20 a.m., Tuesday, 6 December 2011. Trading in the securities will resume with effect from 11.20 a.m., Tuesday, 6 December 2011."

The Company hereby undertakes to make all necessary disclosures to Bursa Malaysia in accordance with the provisions of the Main Market Listing Requirements." 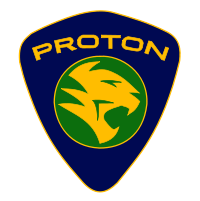 The Board of Directors of PROTON Holdings Berhad wishes to inform that after making due enquiry with the Major Shareholder, Khazanah Nasional Berhad ("Khazanah") has informed that, in its normal course of business, it regularly receives proposals, enquiries and expressions of interest in relation to its various investments and companies where it has interest in, including PROTON. Khazanah will make necessary disclosure at the appropriate time.

We wish to reiterate that in the meantime, business is as usual at PROTON and the Company once again undertakes to make all necessary disclosure to Bursa Malaysia in accordance with the provisions of the Main Market Listing Requirements."

The text is clearly different from the announcement on December 6, 2011.

Another article from Business Times:

It will be interesting to follow this case. If indeed there will be a corporate development around Proton, then the possibility of insider trading looks real. And the authorities are still busy with the MAS/AirAsia insider trading case.
Posted by M.A. Wind at 16:28