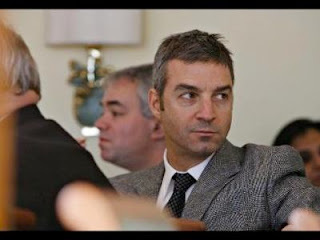 Outspoken hedge fund manager Dan Loeb, the founder of Third Point LLC, has a reputation for his sharp tongue and strongly worded letters to companies. This week the Third Point chief, whose fund owns a 5% stake in Yahoo!, sent a letter to the board of directors about his discontent with what's been happening at the company. In his letters, Loeb often calls the CEOs the worst he's ever seen and accuses them of "tooling around."  But perhaps the best part is he usually signs them "Very truly yours, Daniel S. Loeb." We've compiled some of his best gems he's sent to company execs in the past.

Read more: http://www.businessinsider.com/dan-loeb-letters-2011-12##ixzz1gekX714N
Do not confuse our $22 million stake as a vote of confidence in the Company's senior management or its Board of Directors. On the contrary, it is our view that your record in management, acquisitions and corporate governance is among the worst that we have witnessed in our investment career.

The Company's proxy statements provides us with our first indication that a "good ol' boy" ("GOB") set of ethics prevails at the Company rather than standards dictated by fairness and good judgment.  First, the Company employs the CEO's daughter, Denise, and her husband David Saylor, who received total compensation of $238,776 in 2003

I was not sure whether it was his relation with his father-in-law or the $238,776 salary that affords him the opportunity to work on his golf game during business hours.

the fact that Sturm and Collins could potentially be tooling around in a luxurious business jet, possibly sipping Cristal Champagne cocktails at shareholder expense.

loudly informed Dr. Verbrugge that I was flunking him as a director of the Company and that I planned to expel him from the board as soon as practicable, before unilaterally terminating the conversation.

a substantial majority of the revenues of this business were derived from processing charges for adult pornography sites on the internet....

I must wonder how in this day and age the Company's Board of Directors has not held you and Paul Maier responsible for your respective failures and shown you both the door long ago - accompanied by a well worn boot planted in the backside.

the apparent lack of financial controls, the consistently disappointing results and the abysmal investor relations,

Sadly, your ineptitude is not limited to your failure to communicate with bond and unit holders.  A review of your record reveals years of destruction and strategic blunders which have led us to dub you one of the most dangerous and incompetent executives in America.

I was amused to learn, in the course of our investigation, that at Cornell University there is an "Irik Sevin Scholarship." One can only pity the poor student who suffers the indignity of attaching your name to his academic record.

Furthermore, given the magnitude of your salary, perhaps you can explain why the Company paid $41,153 for your professional fees in 2004 and why the Company is paying $9,328 for personal use of company owned vehicles.

By this clearly stated policy, how is it possible that you selected your elderly 78-year old mom to serve on the Company's Board of Directors and as a full-time employee providing employee and unitholder services?

It is time for you to step down from your role as CEO and director so that you can do what you do best: retreat to your waterfront mansion in the Hamptons where you can play tennis and hobnob with your fellow socialites

Your track record is long and meager, and it is time for change. Accordingly, we demand that the Board immediately initiate a process to sell the Company in whole or several parts to the highest bidder or bidders.

I think we could use a dose of this in Malaysia, at least it would stir things up a bit.
Posted by M.A. Wind at 09:31