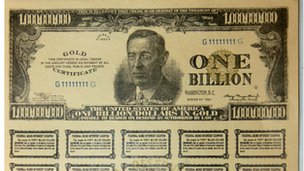 According to Bloomberg, "Italian anti-mafia prosecutors said they seized a record $6 trillion of allegedly fake U.S. Treasury bonds, an amount that’s almost half of the U.S.’s public debt."

From here the story just gets weirder: "The bonds were found hidden in makeshift compartments of three safety deposit boxes in Zurich, the prosecutors from the southern city of Potenza said in an e-mailed statement. The Italian authorities arrested eight people in connection with the probe, dubbed “Operation Vulcanica,” the prosecutors said. The U.S. embassy in Rome has examined the securities dated 1934, which had a nominal value of $1 billion apiece, they said in the statement. Officials for the embassy didn’t have an immediate comment." ...

And weirder: "The individuals involved were planning to buy plutonium from Nigerian sources, according to phone conversations monitored by the police." ...

And really, really weird: "The fraud posed “severe threats” to international financial stability, the prosecutors said in the statement."

Ok great, however one thing we don't get is just how can $6 trillion in glaringly fake bombs [sic] be a "threat to international financial stability."

Malaysia is well under way to have a national debt half that size in RM, with each note being a RM 100 note. The size of that debt has been downplayed by several people in high positions. I am much less optimistic, given the fact that the debt has continued to grow, even in good economic times.