Proton: possible Insider Trading, was EPF one of the victims?

Te recap: on January 16, 2012 DRB-Hicom announced that it would buy the shares of Proton from Khazanah Nasional for RM 5.50 per share and that it would make a Mandatory General Offer for all other shares. But up to that date, the share price of Proton had increased by about 100% in high volume since the first half of November 2011, giving rise to suspicion of insider trading, possibly in a large scale. 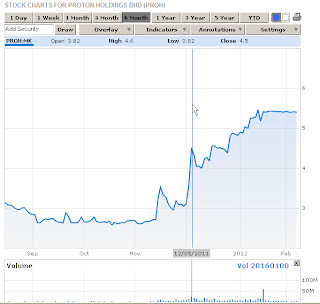 The chain of events (official announcements to Bursa Malaysia in red):

17-11-2011 Article in The Star: "Research analysts and stockbrokers are surprised by the sudden surge in Proton's share price. They say the marketplace is abuzz with all sorts of rumours.".

3-12-2011 Article in The Star: "Speculations that Proton Holdings Bhd is once again a subject of a takeover or a management buyout persisted as the share price of the national auto maker spiked on Friday, rising to a nine-month high at 51 sen to RM3.61 a share."

Bursa Malaysia finally issues an "UMA" (Unusual Market Activity) enquiry, three weeks after the share price took off in unusual high volume. This day represents the vertical line in the above graph.

6-12-2011 Proton announces: "The Board of Directors of PROTON wishes to clarify that after making due enquiry with the Board of Directors and major shareholders, the Company is not aware of any reason for the unusual market activity in the shares of the Company recently, and further, that there is no material corporate development not previously disclosed.". Khazanah Nasional is a major shareholder of Proton.

The article in The Star of that day: "Euphoria is in the air for Proton Holdings Bhd as its share price put on 89 sen or 24.6% to close at RM4.50, amidst talk that its largest shareholder, Khazanah Nasional Bhd, is divesting its stake in the national carmaker. A weekly reported that Khazanah was likely to ask for business proposals from parties interested in its 42.7% stake in Proton.".

8-12-2011 DRB-Hicom announces: "We refer to Bursa Malaysia Securities Berhad’s (“Bursa Malaysia”) telephone query on Thursday, 8 December 2011 regarding the above article appearing in page 1 of Starbiz section, The Star newspaper dated 8 December 2011. In this regard, we wish to inform Bursa Malaysia that the Company is not aware of the source and the basis of the article."

The article in The Star: "DRB-HICOM Bhd's bid for control over Proton Holdings Bhd is likely to include the presence of Volkswagen AG at a later stage, a reliable source said. DRB-HICOM's plan is to first secure a controlling block in Proton. But at a later stage or second phase of the deal, DRB would divest some of its equity to Volkswagen, resulting in both parties sharing control and management in Proton, the source said. Such a structure could make the deal more desirable, considering that it moved away from the prospects of Proton falling into the hands of a foreign party, an issue which was likely to have been part of the reasons why previous attempts by Volkswagen to buy into Proton were scuttled."

12-12-2011 Article in The Star: "Proton adviser Tun Dr Mahathir Mohamad said that Khazanah was selling because it was not pumping more money into Proton, which needed funds for research and development work on new products such as hybrid cars. “I worry about the buyer (DRB-HICOM) having enough money to inject into Proton. The shares it will be buying are above market price, which will make profitability difficult,” Dr Mahathir said after delivering a speech at the MIDF Investment Forum organised by MIDF Amanah Investment Bank Bhd".

13-12-2011 Announcement by Proton: "The Board of Directors of Proton Holdings Berhad wishes to inform that after making due enquiry with the Major Shareholder, Khazanah Nasional Berhad ("Khazanah") has informed that, in its normal course of business, it regularly receives proposals, enquiries and expressions of interest in relation to its various investments and companies where it has interest in, including Proton.  Khazanah will make necessary disclosure at the appropriate time."

Article in The Star: The time has come for Khazanah Nasional Bhd to state its intentions about its 42.7% stake in Proton Holdings Bhd. With so much speculation on Khazanah's possible divestment plans, it would only do Khazanah and the market good if it said something more than the usual “We don't comment on speculation”.

6-1-2011 Article in The Star: "The share price of Proton Holdings Bhd jumped to an intra-day four-year high of RM5.16 as talk and speculation on state fund Khazanah Nasional's 42.7% stake sale in the national carmaker intensify..... Industry observers said DRB-HICOM seemed to be the front-runner in the fight for the stake".

DRB-Hicom announces regarding the article "Bid for Proton Stake": "We refer to Bursa Malaysia Securities Berhad’s (‘Bursa Malaysia”) telephone query on 9 January, 2012 regarding the above article appearing in the various newspapers dated 9 January 2012. We wish to inform Bursa Malaysia that DRB-HICOM has always viewed Proton Holdings Berhad (“Proton”) as an important automotive industry player and accordingly DRB-HICOM was on the look-out for when opportunity will arise to explore any viable proposal(s) which will benefit and add value to the Group’s business and expansion plans. In this regard, the Company has submitted a bid for the acquisition of Proton’s shares held by Khazanah Nasional Berhad (“Khazanah”). As at to date, the proposal is pending decision by Khazanah.".

16-1-2011 Proton shares are suspended and the announcement is made that DRB-Hicom will buy over the shares for RM 5.50.


The above chain of events make a bad overall impression. It looks very much that certain parties where privy of inside information.

Why was Bursa Malaysia so late with its Unusual Market Activity query? The share price of Proton had increased already over 3 consecutive weeks by a whopping 70% while the daily turnover had risen 20-fold when it finally took action.

The announcement on December 6, 2011 by Proton looks puzzling to say the least. The market was rife with rumour, but Proton nor Khazanah Nasional wasn't aware of anything at all?

The fact that the share price was more or less capped on RM 5.50 on the days before the final announcement on January 16, 2011, do suggest that certain parties might have known the price that DRB-Hicom would offer.

From Bursa Malaysia's website: "We place significant emphasis on timeliness, adequacy and accuracy of disclosure to enable investors to make informed investment decisions.". Was that really the case in the above corporate exercise? I have strong doubts about that.

Who are the victims of the possible insider trading? Everyone who sold his shares between November 15, 2011 and January 16, 2012. EPF is definitely one of them:

EPF sold about 15 million shares of Proton, for a price clearly below the MGO price. If the buyers of these shares were trading with insider information, then EPF was disadvantaged for an amount of roughly RM 20-30 million on those trades.

Will EPF take any action? Until now, they have always been as quiet as a mouse, so I would not count on it.

Previous posts about this issue:

http://cgmalaysia.blogspot.com/search/label/Proton
Posted by M.A. Wind at 15:56