Masterskill listed on Bursa Malaysia almost two years ago, it has not been a happy ride for those that picked up the shares at the IPO: 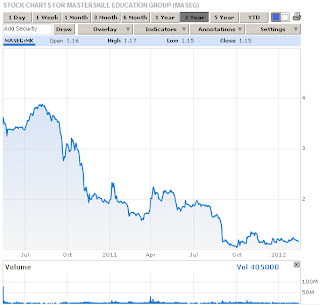 One remarkable fact from the IPO brochure was not so much the RM 5.5 million in listing expenses, but the fees paid by the selling shareholders, which amounted to a staggering RM 33.5 million. 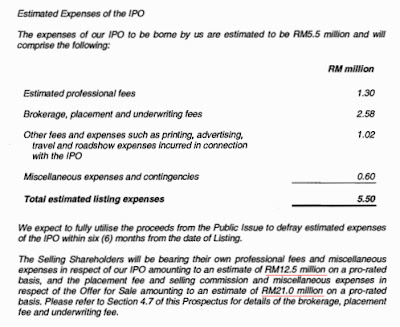 The renumeration of the CEO over 2010 was RM 8.5 million, which is (in my opinion) clearly too high for a company of this size, with such a short trackrecord as a listed company.

Below article is from the Business Times (Singapore), February 21, 2012:

RIDING on a high at its initial public offering (IPO) in 2010 when it went on the market with a 15-20 premium over its peers, Masterskill Education Group - the country's biggest nursing school - has found the ground shifting under its feet owing to an oversupply of new nurses.

Equity analysts, such as Hwang-DBS Vickers, who cover the Bursa Malaysia listed company have trimmed their earnings forecast on expectations of weaker enrolment, following a recent news report that slightly more than half of private nursing diploma graduates in 2010 could not land a job four months after graduating.

This is also in big part because of a mismatch in needs, Health Minister Liow Tiong Lai said recently, since most private nursing colleges only offer general training even though the private sector requires specialised nurses.

However, the writing was arguably already on the wall around the time of Masterskill's listing. Officiating at its prospectus launch, Higher Education Minister Mohamed Khaled Nordin announced a moratorium on new private nursing institutions to prevent an oversupply of nurses given the mushrooming of such colleges.

The proliferation of such colleges had ostensibly been allowed in an effort to improve the nurse to population ratio to international standards of 1:200 from 1:490 currently.

Of 106 institutions, some 60-odd are reportedly private providers, 11 are public institutions, while the health ministry runs the rest.

Some 37,000 students are said to be enrolled in nursing diploma courses with the private providers. About 12,000 students graduate annually, but only 1,500 are absorbed by the private sector.

Masterskill specialises in nursing and allied sciences programmes, and has an estimated student population of 14,000, with about a third currently enrolled in its nursing courses. Perceived as a leader in nurse training with an estimated 16 per cent market share of student enrolment, the training institution contends that its students have far greater success with employment.

But the negative publicity has hurt, especially because it is less diversified compared with its peers Help International and SEGI International.

Demand for its courses last year had already been eroded by other factors including a higher minimum entry requirement for nursing programmes, as well as the reduction in the maximum amount loaned by a government fund for students enrolling in such courses.

Hwang has trimmed its projected net profit for the fiscal year ended Dec 11 by about 7 per cent to RM42 million (S$17.4 million), and forecast earnings for FY12 and 13 at RM28.5 million and RM32.5 million respectively. For FY10, Masterskill had posted a profit of RM102 million.

Its share price has been on the decline since its listing in May 2010 at RM3.80 per share, and is currently trading at about RM1.16.

Controlled by businessman Edmund Santhara, Masterskill now plans to diversify into offering other courses including business, law and hospitality.
Posted by M.A. Wind at 23:04