"And perhaps this is why the American people are turning away from their corporate-branded presidential candidates and Congressional representatives, whose approval ratings have fallen to 9%, in righteous indignation and revulsion, in disgust at their craven betrayal of their sacred oaths and trust. They must have no sense of justice, or of proportion, or history, and apparently they have no shame."

It sounds like the US has not learned anything from the financial crisis?

Much of the financial press picked up this story from the Wall Street Journal, Money From MF Global Feared Gone. Much of the mainstream media in the US and the UK these days is just a conduit for sound bites from the monied interests.


"Nearly three months after MF Global Holdings Ltd. collapsed, officials hunting for an estimated $1.2 billion in missing customer money increasingly believe that much of it might never be recovered, according to people familiar with the investigation.

As the sprawling probe that includes regulators, criminal and congressional investigators, and court-appointed trustees grinds on, the findings so far suggest that a "significant amount" of the money could have "vaporized" as a result of chaotic trading at MF Global during the week before the company's Oct. 31 bankruptcy filing, said a person close to the investigation."

And as we have heard, quite a bit of that money was also diverted in the last few days into the pockets of MF Global's bank, JP Morgan, which still reportedly holds much of it. Now whether they are legally entitled to keep that money is another matter. But this entire charade has been cloaked with a public relations campaign using terms like 'missing,' 'vaporized,' and 'mystery' to describe the customer assets as if no one really knows where the funds had gone, which the CFTC has explicity stated months ago is not the case. And that the handling of the bankruptcy and the method of ordering customers with creditors is in violation of the CFTC's rule 190, as is evident from the precedents and intentions which established it.

What the press apparently has not yet heard or is not reporting is that vulture funds are now contacting the MF Global customers, however they may have obtained their names, and are offering them 85 cents on the dollar for their claims.   Most of the claim holders are reported to expect or to have been payed 72 cents on the dollar as things now stand.   The Wall Street Journal certainly casts gloom on their prospects for a full recovery and hopes of justice, based on the report from an unnamed source. 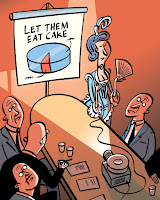 This is creating a difficult position for these much abused customers because of the need to settle their income tax obligations for 2011. Until they can prove the funds are not 'recoverable' they bear the responsibility for their tax obligations on the full amount. But if they settle with the vulture funds they can take the loss and move on, capitulating to the despair and the anxiety of having been cheated and abused by the partnership between government and Wall Street.

Obviously customers can ask for extensions on filing their taxes and hope for a settlement at some point. But the issue is the odd manipulation of the bankruptcy in the courts, and the uncertainty and fear fostered in the customers caused by the management of this situation through rumour and innuendo and the canard of the 'missing money' from almost day one.

Remember that the customers were not speculators who lost money on their bets, as the bailed out banks had been, but in many cases were depositors who had cash and valid title to precious metals and treasuries held on account in a firm that was one of the Fed's primary dealers and a major player at the CME.  And the money was taken twice.  First by MF Global, and then by the financial institutions that seized the money and then manipulated the courts and the press to hide it and to keep it.

The theft of customer funds was bad enough, but the manner in which the exchange, the regulators, the court, the Congress and the Obama Administration have dealt with the aftermath of this is truly despicable. Throughout the financial crisis the character of the public's dealings with the financial sector has been dominated by of opacity, obfuscation, misuse of influence, abuse of power, and fear.
If I have ever seen the opportunity for those in the government to take a heroic stand in defense of the people against the predations of powerful financial interests this was it. And they have failed miserably. So whatever these politicians now say seems at best a shallow mockery, with the ring of untruth, and the hollowness of hypocrisy.

And perhaps this is why the American people are turning away from their corporate-branded presidential candidates and Congressional representatives, whose approval ratings have fallen to 9%, in righteous indignation and revulsion, in disgust at their craven betrayal of their sacred oaths and trust.

They must have no sense of justice, or of proportion, or history, and apparently they have no shame.
Posted by M.A. Wind at 09:22