Bursa announced enforcement against Nakamichi and its Executive Director, some snippets:

Lo Man Heng, the former executive director of NAKA was found to have breached paragraph 16.13(a) of the Main LR for causing NAKA’s failure to announce the 2nd QR 2013, 3rd QR 2013, 4th QR 2013 and AAA 2013 within the stipulated timeframes resulting in the breaches of paragraphs 9.22(1) and 9.23(2) of the Main LR.  A public reprimand and fine of RM2,000 per market day for each delay of the financial statements (subject to a maximum fine of RM500,000 for each financial statement) until the relevant accounts, information / documents of the subsidiary, Tamabina Sdn. Bhd. (Tamabina) was furnished to NAKA to enable preparation and finalisation of the 2nd QR 2013 were imposed on Lo Man Heng.

The finding of breach and imposition of the above penalties on NAKA and Lo Man Heng were made pursuant to paragraph 16.19 of the Main LR upon completion of due process and after taking into consideration all the facts and circumstances of the matter including the following:-

The people behind Golden Plus (about which company I wrote before, here and here) might want to take notice of the above. 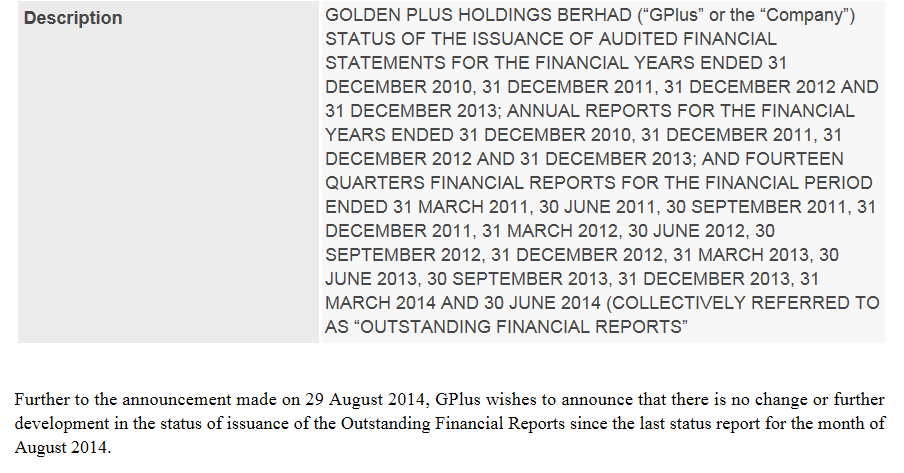