Formidable Malaysian fund managers who speak their mind are hard to come by. But you would not think of that when you meet the unassuming Capital Dynamics founder and managing director Tan Teng Boo – also the founder of Malaysia’s only closed-end listed fund, iCapital.biz.


I have written twice about Tan and iCapital, here and here. I quite like Tan, the Malaysian investment scene would be a lot more lively and interesting with a dozen or so outspoken fund managers like him. In the past I have subscribed to his publication and I am an investor in his closed-end fund iCapital.biz.

However, I am quite disappointed in the above article in The Star. Some of my issues:


First of all, the definition of the above return should be more accurate, it is the return on the NAV (Net Asset Valuation) of the share, not the return of the share price. But one only can sell the share in the market, not the NAV.

Secondly, the share price of iCapital.biz is trading already for about six years at a quite significant discount to its NAV (the current discount is about 21%): 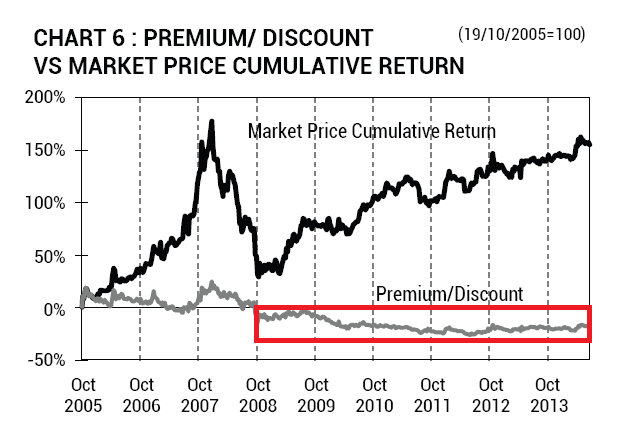 Still quite good, but lower than the above mentioned 13.8%.

Thirdly, shares on the KLCI yield on average about 3% dividend per year, clearly higher than what iCapital.biz has paid out (despite the special one-off dividend of 9.5 cent).

If we take that into account, then for a long term investor the returns would not be that different than for someone who bought a large basket of KLCI shares. Actually, that is quite disappointing.

Fourthly, the fund has outperformed the KLCI nicely based on NAV. But the outperformance was very biased:

In other words, all the outperformance came from the stellar first three years, in the last six years the fund has even underperformed the KLCI (even more clearly if dividends are taken into consideration). Which would also (partly) explain the discount to NAV over those six years.

The reason for the underperformance is clear if one looks at the last column, the Fund's cash level, especially the last two blue boxes.


The Star: "If the cash portion of RM240mil is removed, that return would be much higher."


Correct, but that is "not allowed". The fund manager knowingly and willingly went into a high cash position, which would have worked out wonderful if shares had tanked (he would have been able to pick up shares at a bargain price with his large cash holding).

But shares went up (especially in 2012 and 2013), explaining the underperformance.

Whilst I have sympathy for Tan's conservative approach of holding cash (with hindsight may be too much), one can not simply subtract that and increase the performance by focussing on the invested part of the fund.

What is disappointing is that there is no discussion further about the discount of the share price towards its NAV, and possible ways to deal with it. In my previous articles on iCapital I have detailed how a simple share buyback mechanism could help decrease the discount to its share price. The "threat" alone of a buyback would already reduce the discount, in my opinion.

Further in the article a lot of opinionated statements by Tan, some of which I agree with, some not so much.

One that I definitely like a lot is the following:


Tan resolutely says that he is underweight on the Malaysian oil and gas sector, as well as some of the oil and gas service providers in Singapore. “The oil and gas business is a commodity business where margins are not sustainable. Now, it appears that the barriers to entry are so low. When you have players like Eversendai Corp and Yinson Holdings Bhd, who have never seen a rig in their lives, now becoming global players, I would be very careful,” he says.