The Board of Directors of mTouche wishes to announce that there are possible financial irregularities pertaining to operating expenditure transactions entered into between MTSB, a wholly owned subsidiary of mTouche and PLIL, a third party, from February 2009 to October 2010 amounting to RM6.3 million. The transactions were related to the provision by PLIL of a “quality database for data-mining and marketing of MTSB's services” to users in Malaysia as well as to send out SMSes to the Database (“Database and SMS Services”).

Following the resignation of two members of the Board of Directors in 2012, the Board of Directors was made aware of vide an anonymous letter dated 26 November 2013 addressed to the Audit Committee Chairman, Mr Yeap Teik Pung, that there may be inconsistencies in the transactions carried out between MTSB and PLIL.

The Board of Directors instructed the Management of mTouche to conduct an internal investigation on its records with regards to PLIL and the Database and SMS Services which was concluded in February 2014. The internal investigation revealed that there are no records showing that PLIL had provided any of the Database and SMS Services as stated in the Service Agreement entered into between MTSB and PLIL.

On 8 January 2015, PKFA submitted their final report to the Board of Directors. PKFA concluded that the veracity of the payments made to PLIL is highly questionable and there are indications of irregularities, discrepancies, inconsistencies and anomalies in the accounting records and supporting documents with significant payments made to PLIL, whose veracity is suspicious and cannot be reasonably ascertained.

A summary of the findings is as follows:

1.   Inconsistencies in the payment control process of MTSB pertaining to payments made to PLIL;
2.   Non-disclosure of details of the transactions to senior management;
3.   Override of controls and policy and procedures;
4.   No corresponding sales traced to the services provided by PLIL;
5.   Irregularities noted from the review of the contract entered into between MTSB and PLIL; and
6.   Uncertainty of the identity of PLIL from the company searches.

The Board of Directors have, amongst others, taken the following measures and/or steps to safeguard the best interests of mTouche and its shareholders:-

1.   Lodge a police report which was done on 13 January 2015;
2.   Seek legal advice on the possible courses of action mTouche can take to recover the losses; and
3.   Review the current internal control processes to ensure that similar transactions will not recur.

The Board of Directors could not make any announcement earlier as it did not have sufficient evidence to substantiate the allegations and to assess with certainty the financial and operational impact to mTouche.


A few things are interesting in this announcement.

It mentions "Following the resignation of two members of the Board of Directors in 2012", somehow suggesting that they might had something to do with the matter. The description is not very clear, since five directors resigned in 2012 (and one ceased to be alternate director). But most likely the statement points at the only two executive directors who resigned that year: 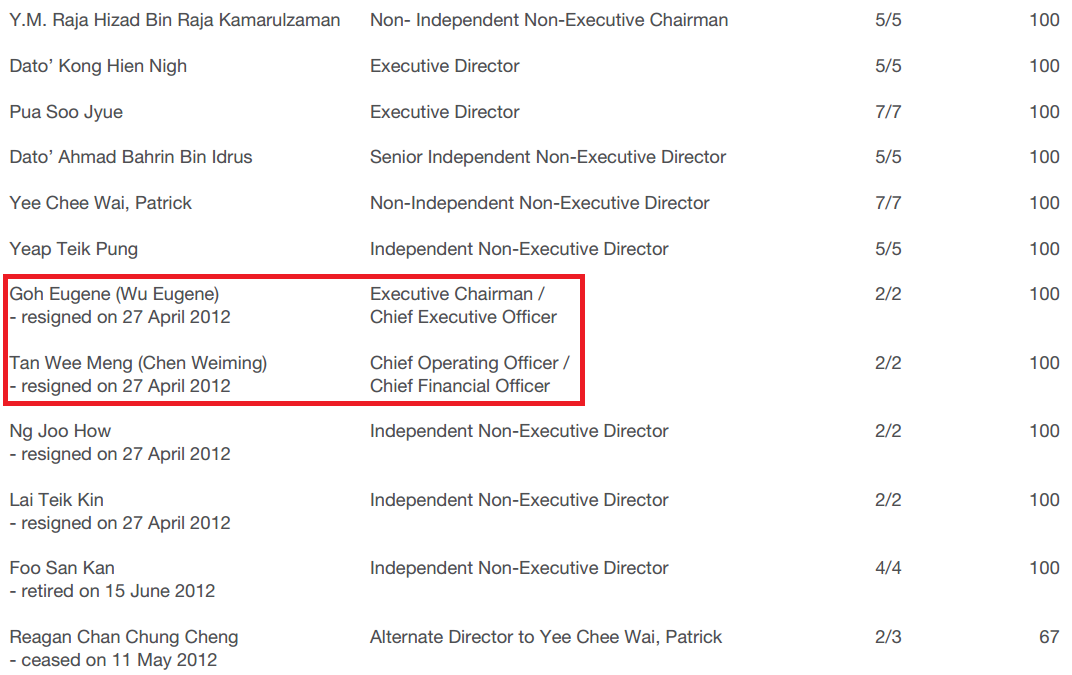 Something else is "Uncertainty of the identity of PLIL from the company searches". A Google search on "Pearl Legend International" yields nothing (except the above announcement and related articles), which is very weird in the current age. Why did nobody notice before?