I blogged about Tanjung Offshore before.

Unfortunately, it looks like Tanjung's problems only have increased. In other words, shareholders should stay alert and active.

Firstly, on November 20, 2014 the company announced its third quarterly results, which were far from inspiring, in the contrary: 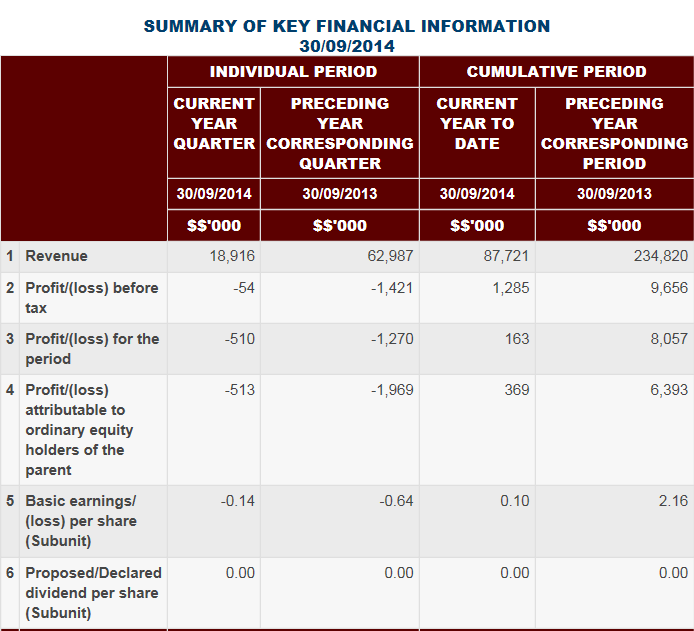 
"We refer to the article entitled “Tanjung Offshore to abort Bourbon RTO deal?” that appeared on The Edge Financial Daily today.

On behalf of the Board of Directors of Tanjung (“Board”), AFFIN Hwang Investment Bank Berhad (formerly known as HwangDBS Investment Bank Berhad) (“AFFIN Hwang IB”) wishes to announce that Tanjung and the Vendor Group (as defined in the announcement dated 5 June 2014 comprising Farid Khan Bin Kaim Khan and his business partners, Mower Tunggal Jaya PT, Megagold Indonesia PT and Zona Maju Mapan PT and their business partners and Bourbon Far East Pte Ltd) have, via an exchange of letter, mutually agreed to terminate the heads of agreements in relation to the Proposals (“HOAs”) on 29 December 2014 (“Termination Letter”) with immediate effect without any legal and financial recourse against each other."


May be not unexpected, the termination itself, but still, it always appeared to be a rather strange deal.

And why does the company need to react on an article of The Edge, why did it not proactively announce the news itself?

KiniBiz wrote "Was Tanjung Offshore venture doomed from the start?" (behind paywall). Some snippets:


Tanjung Offshore’s case was definitely not aided by their lack of disclosure of the deal, even to their own shareholders. A Bursa Malaysia announcement, which came out after the minority shareholders’ spokesperson had reached out to the media, was a statement that the deal would be negotiated to benefit all shareholders, and that yes, they were negotiating a waiver from Ekuinas for the three-year non-competition clause of the sale. Why is it that minority shareholders, who are most definitely shareholders, by the way, were marginalised to such an extent, as to not know of the proceedings of the deal? Tiger smells something fishy, and not of the good variety, either.

It all just seems a mess. Why did Tanjung Offshore not secure a waiver from Ekuinas before proposing the deal? Why was the deal not made with proper regard to global oil prices at the time? Did the group not see the potential fall in oil prices? Why were shareholders marginalised?


"The Board of Directors of Tanjung Offshore Berhad ("Company") wishes to announce that the Board has formed an Independent Committee to review and make recommendations on matters arising from recent media reports on the Company."


That looks like a good move, given all the events that have happened.

But it sounds very passive, the company should have been much more transparent and proactive, corporate governance standards appear to be very poor.

Also, what are "matters arising from recent media reports on the Company"? How do we know which media reports the Board of Directors has knowledge off? Why do they not just list the matters at hand, what exactly is the Independent Committee going to review?

In Focus Malaysia of Jan 10-16, 2015 an article "Tanjung Offshore has host of issues to tackle", some snippets: