I wrote before about this issue.

The Board of Directors also wishes to clarify that the online renewal of foreign maid and foreign worker PL(KS) are part of MYEG’s ordinary course of business involving development and implementation of E-Government services and the provision of other related services for the E-Government initiatives.

Further, the Board of Directors would also like to clarify the following:-

1)     The original scope of service was to enable the public to renew their foreign maid and foreign worker PL(KS) online which has not changed with the recent cessation of PL(KS) renewal at Immigration Department’s counter. Nevertheless, the Government mandated for MYEG to compile the database of foreign worker which is to be accessed by the Government without increasing the fee to be collected by MYEG.

2)     Previously, PL(KS) can be renewed through the Immigration Department’s counter or through MYEG’s portal. The recent announcement by the government to only allow foreign maid and foreign worker PL(KS) to be renewed online through MYEG’s portal is at the prerogative of the Government which MYEG cannot make any announcement on behalf of the Government. The online renewal of foreign maid and foreign worker PL(KS) contributed approximately 5% of MYEG group’s revenue for the first quarter of financial year ending 30 June 2015, before the cessation of PL(KS) renewal at the counter. The cessation of PL(KS) renewal of foreign maid and foreign worker at the counter is expected to contribute positively to the earnings of MYEG’s group in the future, but we are not able to ascertain the exact impact at this point in time.

3)     The convenience fee approved by the Government was RM38 which has been imposed since the start of the online renewal of foreign maid and foreign worker PL(KS) in the years 2011 and 2013 respectively. There was no revision to this amount even with the cessation of PL(KS) renewal at Immigration Department’s counter and the expansion of the scope of service requested by the Government as stated in Section (1) above.


Is the announcement that PL(KS) can only be renewed through MyEG's portal material information?

If so, should it have been disclosed by MyEg in a timely matter to Bursa's announcements website?

I guess that Bursa and SC will look into this matter.

The Edge Malaysia wrote in their weekly publication of January 19, 2015:


".... But this is material information that would brighten its earnings prospects and timely announcement is necessary for the investing public to make informed decisions.

If such information is not revealed to the public, would it be considered insider trading if those investors who were privileged to get hold of the news at a conference two weeks ago traded in MyEG's shares?

No doubt, the company cannot speak on behalf of the government, in this case the Immigration Department, as it is not owned or controlled by the government. Yet, its top executives chose to reveal the information to a small group of fund managers at an investment roadshow.

Perhaps, it is time for the government departments to be mindful of prompt disclosure - a practice prized by Bursa Malaysia and the Securities Commission." 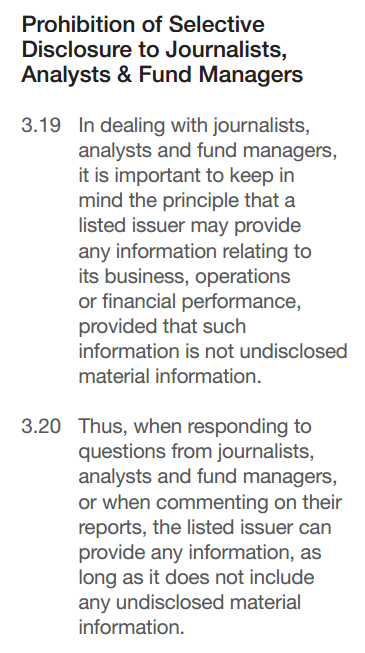 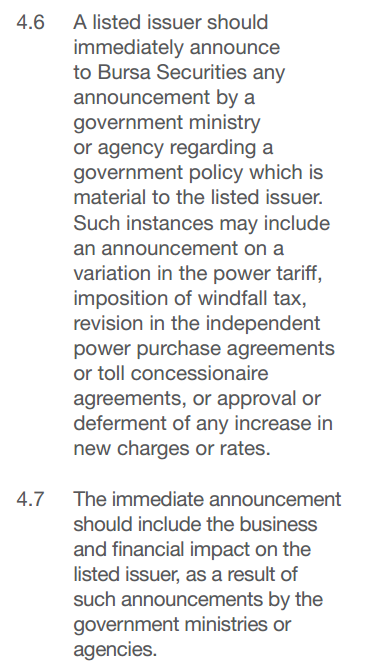