Moody and its Chinese red flags

From Reuters: "China developer Kaisa says fails to repay $51 mln loan, may default on others"


Chinese property developer Kaisa Group Holdings said it had failed to repay a HK$400 million ($51.3 million) loan and warned it may default on more debt, the latest problem to hit the firm amid a downturn in the real estate sector. In a stock market filing late on Thursday, the company said the payment of the loan and its interest became compulsory on Dec. 31, following the resignation of its chairman Kwok Ying Shing. The failure to repay the HSBC term loan may trigger default on other loan facilities, debt and equity securities, co-chairman Sun Yuenan said in the filing to the Hong Kong exchange.


China observers are most likely not surprised, the Chines property market appeared to be red hot, and the balance sheets of many developers stretched, Kaisa was one of them.

As so often, with 20/20 hindsight we are all experts. But there was one company which did stick out its neck, namely Moody, in 2011. Its report "Red Flags for Emerging Market companies: A Focus on China" can be found here.

Kaisa does indeed feature on the list of Chinese property issuers, with seven possible red flags being tripped and a negative outlook on its bond rating: 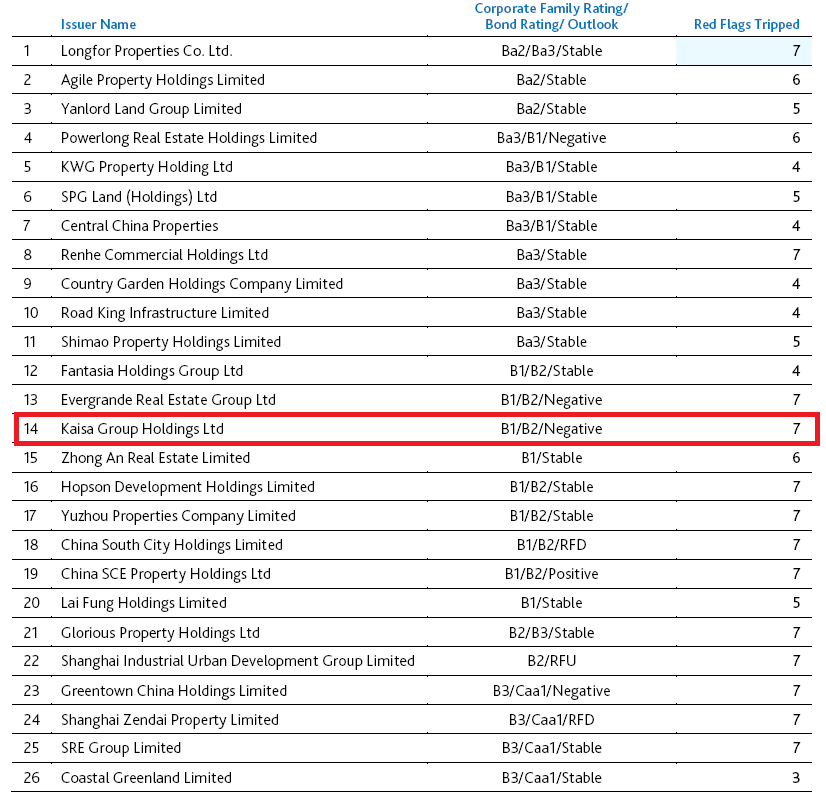 We know now that Kaisa is indeed in big troubles, so it appears to be a job well done by Moody's.

But quite soon after publishing the report drew the attention of the Hong Kong regulators, according to this article from Reuters:


"The report caused a sharp fall in the stock and debt prices of some Hong Kong-listed companies it flagged, including West China Cement (2233.HK) whose shares slumped 17 percent before rebounding. That prompted stinging criticism from some market analysts who debated the agency's risk framework, especially since at least one of the so-called "red flags" was publicly denied by one of the companies. The Moody's note also grabbed the attention of the city's market regulator, the Securities and Futures Commission."

One can of course argue with Moody's methodology, but that kind of debate on which factors matter for future performance is what makes a market.

The Moody's appeal has yet to be heard, and the SFC's Decision Notice is not yet a public document, so we don't know what the precise allegations are, the arguments in their favour are or what Moody's full appeal will be, but we hope that the SFC has more grounds for complaint than a few errors in a report covering numerous companies, because it would be unreasonable to expect that a report on 61 companies with 20 different flag-tests would be correct on all of the 1220 tests.


And further down the article:


The risk of a chilling effect

Free markets depend on free speech and the open exchange of opinions and analysis, whether it turns out to be right or wrong. The SFC will need to tread very carefully in this area and show good grounds for their actions in the SFAT and MMT, otherwise they are likely to have a chilling effect on critical research. That would be very bad for the market, for at least three reasons:

I can't agree more with that.