Boustead Plantations announced it proposes to sell a piece of land for RM 620.1 Million:

The company specified the cost of investment:

The company gave more background over the history of the land: 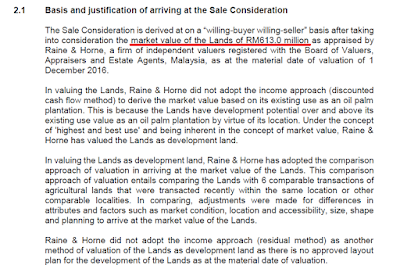 Regarding the acquisition of the land, we can find more announcements here, the independent advice circular (dated November 20, 2013) of the Al-Hadharah Boustead REIT which was subsequently delisted.

The acquired land consists of 678 hectares of the 1,379 hectares from the Malakoff Estate in Penang:


While the deal appears to be good for shareholders of Boustead Plantations, the previous unit holders of Al-Hadharah Boustead REIT might feel short changed.

The authorities should look into the two valuation reports (both the valuation given and the methods used), the difference in value looks much too large.

They should also revisit the delisting exercise of Al-Hadharah Boustead REIT to review if the deal for minority shareholders was indeed "fair and reasonable", as the independent adviser (Hong Leong Investment Bank) claimed.