The five faceless investors who own much of Australia's largest companies


It turns out that five investors – HSBC, JP Morgan, National Nominees, Citicorp and BNP Paribas – own a massive chunk of our listed companies. What's surprising about this is that many Australians probably haven't heard of some of them. What's even more surprising is that if you look at the big players in our 20 largest industries, the five faceless investors have a majority stake in most of them. They dominate industries as diverse as airlines, insurance, telecommunications and mining.


Oops, as pointed out by many commentators, these banks don't actually own those shares, they are just the trustee.

Would such a mistake have been possible in Malaysia? I don't think so, please take a look at the last annual report from Maybank: 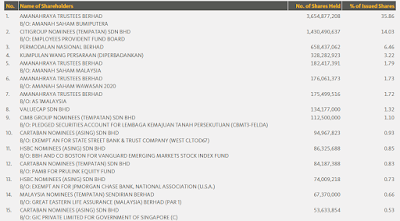 It is clearly stated that Citigroup, HSBC etc. are the nominees, and the names of the beneficial owners are spelled out.

Kudos to Bursa Malaysia for the added transparency, which is missing in many other countries.