One observer drew my attention to United Plantations, they issued their annual 2016 report already (kudos for that), but strangely enough not their Q4 results.

In other words, we need to dissect the annual numbers, compare them to the Q3 numbers to arrive at the P&L Q4 numbers (the balance sheet for the Q4 is of course the same for the year).

The company did the same the year before, not issue the Q4 financial results, but until 2014 all seems normal: 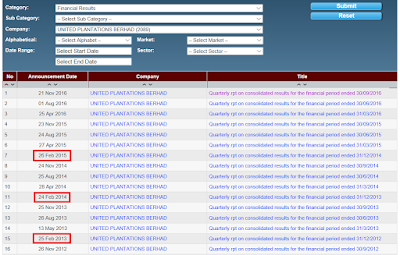 Highly unusual, I cannot recall ever having seen this before, every company that I have checked issues four quarterly financial results per year. No action was taken in 2016 by the regulators, so I assume all is in order.

Other than that, UP has a pretty good track record, Aberdeen is an investor in the company.