On i3investor's website one kind person commented on this matter and pointed at the right paragraph.

The relevant text can be found in part 3 of the annual report of United Plantations, page 176 (PDF page 37): 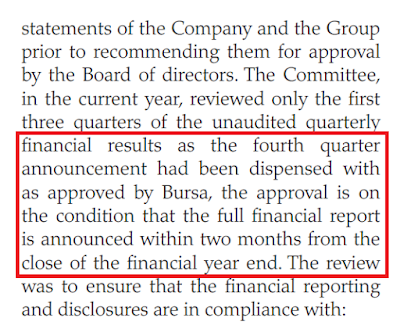 Hmmm, not sure what to think about this.

On the other side, I am rather surprised about not giving the 4th quarter results separately. The company anyhow will have the relevant numbers. Analysts and interested investors who want to (and actually: should) scrutinize the quarterly numbers now have to use the Q3 numbers and the annual numbers to come up with the P&L and CF numbers for the Q4 numbers. Also, no relevant comments specific to the Q4 results will be given.

Anyhow, one condition is that the full financial report has to be announced within two months, not many companies will be able to comply with that, hence they have to announce the Q4 financials still the old fashioned way.