All results for 2016 have been announced, time to update the score card: 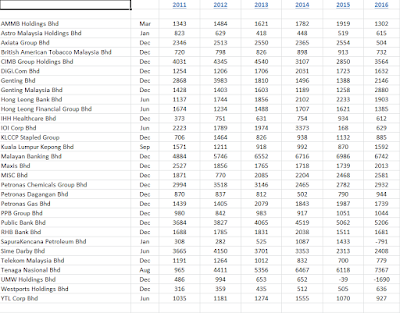 Not impressive, I am afraid, except for a few good companies (like Public Bank and Westports) and a few decent ones.

The totals for the year:

Ten companies started to report their 2017 profits, they are roughly similar to the 2016 profits. If there are no more large one-off write downs (like in the oil & gas industry), the combined profit in 2017 might be higher than 2016. But if that is enough to justify the historically high valuation of the Malaysian market, I doubt it. For that there has to be a consistent yearly growth of say on average 10% in net profits, something that seems to have been absent the last few years.