Clarkson, the valuer who didn’t believe his own valuation

Clarkson Valuations Ltd. from was appointed the expert adviser to value the vessels of POSH. They valued the existing vessels and the vessels under construction which resulted in a huge revaluation surplus (as calculated by KPMG) of about USD 700 million, increasing the shareholders’ funds from USD 188 million to USD 899 million.
On the face value of it, this already seems strange, the vessels were bought and ordered during economic boom times and at the writing of the circular a large recession was raging. Also, most acquisitions were done only about one year ago.
Clarkson explicitly wrote the following in the circular (dated November 25, 2008):

But what is the use of a valuation at September 15 and a circular of November 25 on which date the values should not be taken to apply?
Clarkson also valued the “Newbuilds”, ships under construction. Valuing existing vessels in bad economic times is already difficult enough, valuing vessels under construction is even more hazardous.

On the basis of prompt, charterfree delivery on September 15, 2008? First of all we are more than two months further, secondly some of these vessels would take years before they would be completed.
There was also huge stress at the shipyards, what would happen if they would go bankrupt? Clarkson warned:

Clarkson’s website suddenly changed on December 4, 2008 (after the circular, but with still six days to go to the EGM): 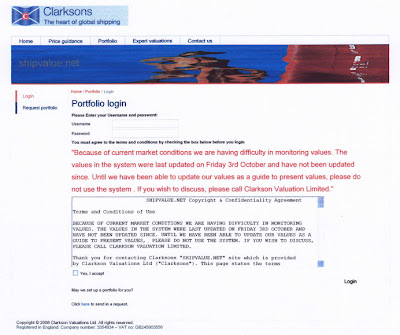 This is about the most clear warning signal that Clarkson’s valuation of the vessels from POSH should have been withdrawn, since Clarkson themselves advised not to use their system, the values had not been updated for two months.

They didn't trust their own values anymore!
Their valuation reports were written between November 21 and November 24, 2008, if they had noticed any change in their valuation since September 15, 2008, they had the obligation to notify this. 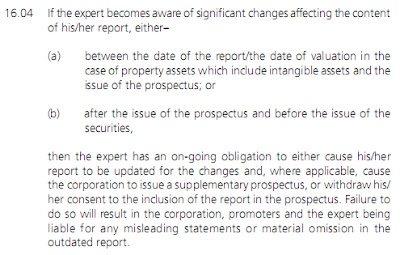 And although Clarkson gave a whole list of red flags, it did not withdraw its valuation. In my opinion, it definitely should have, I have zero doubt about that.
In the POSH deal Directors were involved with huge experience in the maritime industry. They were on the boards of POSH, Maybulk and PCL, some were connected to Global Maritime Ventures, Global Carriers Bhd and Alam Maritim Resources Bhd, all companies in this industry. Surely they must have known about the huge stress in the industry, the falling values of vessels and that on December 10, 2008 (the date of the EGM) the valuations of Clarkson were way off.
But nobody withdrew the valuation, the EGM continued and the Minority Investors of Maybulk were hugely misled in the process.
After the deal was sealed, I found more and more credible information that indeed things were very bad in the market for vessels. For instance the following article:
http://www.compassmar.com/CMSdoclinks/2009%2005MAY14%20JANE's%20TRANSPORT%20-%20Market%20seeks%20solutions%20for%20meaningful%20asset%20valuation.pdf

But the most interesting information came from a surprising source: Clarkson themselves! The report can be found here, under “Interim Report 2009”:
http://www.clarksons.com/investors/presentations/?year=2009
Pages 3 to 6 give an indication of the stress in general for the industry, but the most relevant is page 7: 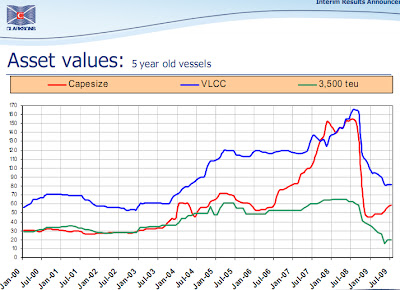 In more detail only year 2008 with vertical lines on September 15 (the date of Clarkson’s valuation) and November 25 (the date of the circular): 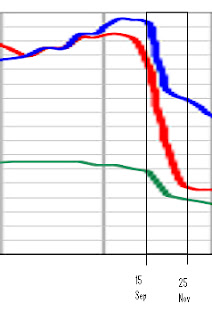 As can be seen, prices reached their maximums in July/August 2008, and after that went down fast. Between September 15 and November 25 prices came down about 40% for the three indices, that was why Clarkson in their valuation report kept on stressing the point that their values were only good on September 15th.
And it also clearly shows that Clarkson should have withdrawn their valuation report before the EGM.
Since POSH was highly geared, even a fall of 30% would have huge consequences for the Revalued Nett Asset Value, it would shave about USD 500 million from the valuation, a large amount by all standards.
Much later, when the deal was sealed
POSH cancelled some Newbuilds in 2010. Strangely, it only received back its refund, no trace of huge paper profits that were promised (from their year report 2009):

This valuation by Clarkson played a key role in the revaluation by independent adviser KMPG, the subject of the next episode.
Posted by M.A. Wind at 10:20