Many people are still eagerly waiting for the verdict by the Securities Commission (SC) in the Sime Darby / E&O case, about which I have written before:
http://cgmalaysia.blogspot.com/2011/09/sime-darbys-e-bod-poses-policy-dilemma.html
http://cgmalaysia.blogspot.com/2011/09/sime-darbys-e-bid-poses-policy-dilemma.html
http://cgmalaysia.blogspot.com/2011/09/sime-darbys-e-bid-poses-policy-dilemma_14.html
http://cgmalaysia.blogspot.com/2011/09/updates-on-corporate-exercises.html
An important issue is the Chairman of the Securities Commission being married to the Chairman of E&O, giving rise to the possibility of (perceived) conflict of interest.
It is interesting to note that the Securities Commission makes a very clear statement on its website on this issue:
"Conflicts of Interests
An integral part of ethics and integrity is the avoidance of conflict of interest. In this regard, all SC staff and their immediate family members have the obligation to avoid putting themselves in situations of conflict where their personal interest is conflicted with the interest of the SC. A process on declaration of interest has been put in place within the SC to ensure that SC employees adhere to this requirement."
A case I have been very much involved with is the acquisition of 22% of POSH by Maybulk in November 2008 for about RM 800 million (mostly cash) during the worst global recession of the last 50 years.
I have made some initial comments here:
http://cgmalaysia.blogspot.com/2011/09/edge-maybulkposh-epic-kretam.html
This will be followed by a detailed write-up over many episodes on my blog of all that was wrong with the circular (which was a lot).
The deal was approved by all non-related Directors, one of them was Dato’ Tajuddin bin Atan who was President / Group Managing Director of Bank Pembangunan Malaysia Berhad (BP).
From Maybulk’s Annual Report 2008: 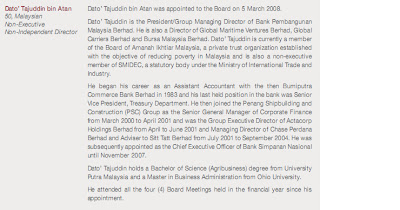 BP (itself wholly owned by the Ministry of Finance) owned 18% of the shares of Maybulk and with related parties of the PCL group not allowed to vote they had a very large, probably deciding vote.
Since Dato Tajuddin bin Atan voted in favour of the deal, we can safely assume that BP did the same. But Dato Tajuddin bin Atan was also a Director of Bursa Malaysia (BM), which causes a perceived conflict of interest, since the circular had to be approved by BM.
BM has a large Code of Ethics:
http://www.bursamalaysia.com/website/bm/about_us/downloads/BM_Code_Ethic.pdf

On May 1, 2009 Dato Tajuddin bin Atan resigned from Maybulk.
The Securities Commission had received from me over time many detailed complaints about the Maybulk/POSH case. It must be noted that these complaints are mostly dealing with the circular (which was of exceptional poor quality) and since BM had approved the circular they would also deal with my complaints (and hopefully of other angry minority shareholders of Maybulk). In general, I don’t put much trust in companies doing their own policing (the results are often very disappointing). I also believe it was wrong for to turn into a private company, since the aim of companies is to make money while enforcement is not making money at all, in the contrary:
http://cgmalaysia.blogspot.com/2011/08/when-smoke-signals-are-right.html
On April 1, 2011 Dato Tajuddin bin Atan was appointed the current CEO of Bursa Malaysia (BM). 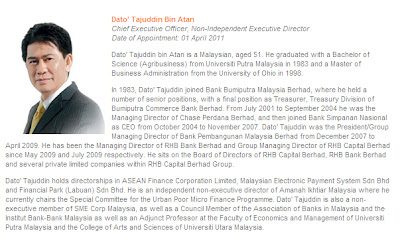 He lists many directorships, but interestingly not the one that is relevant to the Maybulk/POSH case, namely his directorship in Maybulk, exactly during the approval of the controversial deal.
In the organisational chart of BM he is directly above the Chief Regulatory Officer who is responsible for dealing with complaints. 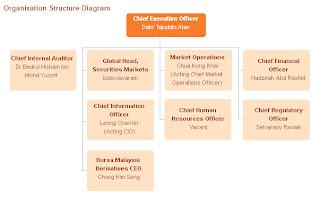 BM is looking into complaints regarding the Maybulk/POSH deal while its CEO has approved this same deal in his previous job as director of Maybulk.


And what would happen if the investigation leads to results that some form of legal action has to be taken against Directors of Maybulk, will the CEO of BM take action against himself?
Is there not a huge perceived Conflict of Interest here?
Again, similar to the Sime Darby / E&O case, Chairmen and CEO’s of institutions like BM and SC should not be in this awkward position. Other relevant parts of the Ethics Code of BM: 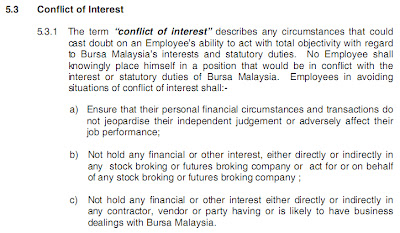 The full text can be found here:
http://www.bursamalaysia.com/website/bm/about_us/the_organisation/corporate_governance/code_ethics.html
My complaint has been stonewalled for a long, long time. The RPT was initially announced on September 15, 2008, interestingly enough the same day that Lehman Brothers went bankrupt, signalling the start of the global recession. That event would be highly relevant to the valuation used in the circular of the acquisition of POSH since all asset prices were dropping like stones since the demise of Lehman, something that was not once mentioned in the 130 page circular (it only mentioned "volatile" which means sharply fluctuating, in reality prices were simply plunging).
I offered several times to come to the office of the Securities Commission for additional information about this case, offers that were not accepted. Rather strangely, one would assume that all information would be more than welcome.
Only after I wrote a very sharp, 14 page article (later replaced by a 29 page article), giving highly critical feedback on the Corporate Governance Blueprint 2011 and detailing the Maybulk/POSH deal (amongst others) was I invited to the SC’s office.
The meeting was held August 8, 2011 and I was finally allowed, after almost three years, to share my views with representatives of. Securities Commission and . It was a rather one-sided affair with SC and BM hardly being able to bring in anything against the huge amount of critical issues that I brought up.
The investigation is still ongoing.
Posted by M.A. Wind at 11:37