Maybulk/POSH: What happened to the Cash?

To recap: PCL, Majority Shareholder of Maybulk and POSH invited Maybulk to invest USD 221 million (about RM 800 million, 90% cash plus one vessel) for 22% of POSH, which had Shareholders Funds of only USD 188 million, which includes already goodwill of USD 295 million.This controversial deal happened November/December 2008, in the midst of the global recession.

The first question that any investor would ask if somebody would approach them to invest in their company would be: "Why, what is the purpose?". Unbelievable but true, in the Maybulk/POSH circular of 130 pages, this is not mentioned one time. The circular can be found here:

There are (not surprisingly) many references in the rules that the purpose has to be mentioned, for instance in the Due Diligence:

On December 10, 2008, the EGM voted in favour of the acquisition, on December 16, 2010 already the whole transaction had been completed.

The Securities Commission and/or Bursa Malaysia can simply order the Directors to come to their office and ask them what the purpose was (I hope they have done this by now). Unfortunately, I only have the publicly available information to work with, so I acquired the 2008 year report of POSH.

I expected to see a large amount of cash in the accounts on December 31, 2008 since the money had been deposited only two weeks before. But to my surprise, almost all the money had magically disappeared!

What had happened to all the money? Looking further in the accounts, there was only one reasonable explanation:

All the money had been used to repay the loan to PCL!

I have checked the 2008 Year Report from PCL, and that does indicate the same, a large amount of cash:

POSH could have used the money for working capital, for repayments of its bank borrowings, for the acquisition of additional vessels or could even have bought over whole companies. This was in the midst of the worst global recession of the last 50 years, asset prices were falling out of the sky and there were lots of bargains everywhere. Using it solely to repay all the loans to PCL is about the worst purpose that could have happened to POSH and thus for Maybulk who had just invested in POSH.

Was this the purpose for Maybulks investment in POSH known to the Directors of Maybulk and to advisers AmInvestment Bank and KPMG? Was this the reason why the purpose of the investment was nowhere given in the circular, knowing that Minority Shareholders would not like it at all?

There are more indications for this theory. According to the Prospectus Guidelines, there should have been a recent, audited account of POSH, not more than six months old. But there wasn't, another breach of the rules. Because there was no recently audited account, only the full details were given of the accounts from 31-12-2007, almost one year old, and that for a very young and quickly changing company. There were some numbers given regarding the nine month period until September 30, 2008. 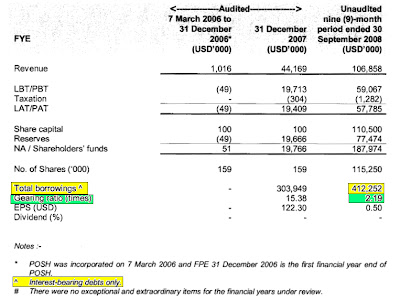 Total borrowings had ballooned to USD 412 million, a worrysome amount. But it only mentioned the interest-bearing debts of POSH, while the debts from PCL were non interest bearing. Why did it not mention these, this is essential information?

Below in green it mentions the Gearing Ratio, but it only uses again the interest bearing debts, while the definition of Gearing Ratio is very clearly regarding all debt, both interest and non-interest bearing. Many accountants must have been involved in this deal (Maybulk directors, AmInvestment Bank, KPMG), did they not spot this obvious fact?

As often in these kind of circulars, no alternative is mentioned what Maybulk otherwise could do with the money. One glaring alternative would be to just hand the money to its shareholders in the form of a bumper dividend. It didn't do that, however.

And what did PCL do with the money? It paid a huge dividend of USD 400 million to its shareholders. Money for a decent part from Minority Shareholders from Maybulk.

So far we have seen the following significant breaches of rules:
This is however only the top of the iceberg. The next two episodes will be: