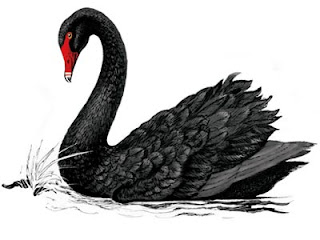 Nassim Taleb believes in probabilities, not predictions, but at times it can be hard to tell the difference. “The real Black Swan event,” he said in June, “is that people are not rioting against the banks in London and New York.”

Taleb saw it coming, and his well-publicized remark may be the only reason Occupy Wall Street hasn’t been labeled a black swan. This once-rare bird, made ubiquitous by Taleb’s best- selling 2007 book of the same title, now appears so often after dramatic events, such as Occupy Wall Street, that sightings of it have become meaningless.

The black swan was meant to be a rallying cry for preparedness. Instead it has become the opposite: a loathsome excuse for lack of planning by those who should know better. We need to send the swan to a rear shelf in the closet of ideas to gather dust until an actual black swan appears.

In the past two years, the term “black swan” has been applied to the earthquake in Haiti, the deadly Russian heat wave, the Gulf of Mexico oil spill, the stock market’s “flash crash” of 2010, the volcanic eruption in Iceland that spread an ash cloud over Europe, the Standard & Poor’s downgrade of the U.S.’s AAA credit rating, the populist uprising in Egypt, and lawlessness in Mexico.

The black swan has been so trivialized that it was even used to describe the 2010 “snowmaggedon” winter storms in Washington. And, of course, the black swan has been blamed over and over for laying the egg known as the financial crisis. Some observers are convinced that when they look at the sovereign debt crisis unfolding in Europe, they see ebony wings.

Taleb’s book regaled readers with stories of a space- shuttle explosion, the rise of Adolf Hitler, World War II, the emergence of Islamic fundamentalism, and the stock-market crash of 1987. Yet none of these events, nor recent crises, fits his definition of a black swan: the “unknown unknown,” an outlier with extreme impact for which nothing in the past “can convincingly point to its possibility.” In fact, if you waited long enough, the odds of such things happening approach 100 percent.

Taleb knows there are fewer black swans than people think. But he disdains experts, predictions and theories of causality. This makes his concept slippery: If nothing can legitimately be forecast, then anything is a black swan.

To his credit, in a revised edition of the book, Taleb freely admits he took the black-swan metaphor too far. A philosopher challenged his definition, to which he responded, “Indeed, she caught me red-handed. There is a contradiction: This book is a story.” He added, “Ideas come and go, stories stay.”

Taleb has been vocal in denouncing the idea of the financial crisis as a black swan. To cover such foreseeable extreme events like these, he created a category of “gray swans.” But gray swans are drab. Nobody talks about them.

The last event that I would call a true black swan was Sept. 11, when both World Trade Center buildings were attacked and collapsed, against engineering expectations. Contrary to many claims, the terrible 2011 Japanese earthquake wasn’t a black swan, even though seismological models, as they always do, failed to predict its severity. Apart from the huge loss of life, economic losses are estimated in the hundreds of billions, yet the insurance industry will probably pay out only about $35 billion in claims. Insurers are aware these events can exceed model predictions by wide margins so they have limited their earthquake exposure and excluded nuclear losses from coverage.

Likewise, many of the other black-swan disasters of the past few years that are really gray swans have resulted in unpleasant, but far from crippling, losses for the insurance industry. And when the day comes that a gigantic asteroid strikes the Earth; a New Madrid-fault earthquake levels much of the eastern U.S.; or a bioterrorist/cyberspace attack hits, the insurance industry will already have arranged not to pay the losses through policy exclusions.

There is a disconnect here, and a big one. If insurers can spot the risk of a gray swan, underwrite and even exclude it, why aren’t those who are exposed to the risk doing a better job of preparing?

Instead we are making matters worse. For one thing, it was only a matter of time before Wall Street would figure out a way to profit from gray swans. As of April 2011, about $38 billion had been raised by “black swan” funds designed to profit from extreme low-probability events. Are these funds a canny strategy or a wasteful form of hedging? Either way, their proliferation certainly brings Armageddon closer by creating counterparties for the kind of risky optimistic bets needed to cause it. Many other responses to the so-called black swan of the financial crisis have added to the moral hazard already in the banking system.

The “too big to fail” taxpayer guarantee and the lack of substantive financial reform are the worst offenses. This isn’t what should be happening. If there had been no way to duck accountability by calling the crisis an “unforeseeable” event, the public might have demanded real solutions earlier from its leaders. Without the excuse of the black swan, perhaps there would be less reason now for anyone to Occupy Wall Street.

(Alice Schroeder, the author of “The Snowball: Warren Buffett and the Business of Life” and formerly a top-ranked insurance analyst on Wall Street, is a Bloomberg View columnist. The opinions expressed are her own.)
Posted by M.A. Wind at 10:18