Article from The Business Times:

".....The New Straits Times accepts that there was no requirement for Dato' Abdul Gani b. Yusof to notify Bursa, prior to selling the said Metronic shares. The New Straits Times hereby withdraws the statement and imputations unreservedly and apologises to Dato' Abdul Gani b. Yusof ....."
The question that comes to mind: "Why did it take the NST so long to come with this statement?". In the announcements website of Bursa Malaysia the following appeared on January 14, 2011:

"Given that the trading in the shares is not within the closed period as required under the Paragraph 14.08 of the Listing Requirements of Bursa Malaysia Securities Berhad, the Director has no obligation to make prior notification to Bursa Malaysia and the Company."

I guess that Bursa will check on these statements so all should be ok.

On the other hand, 100 million shares in the open market on one day, about 16% of all the shares of MTronic, that did raise my curiosity. 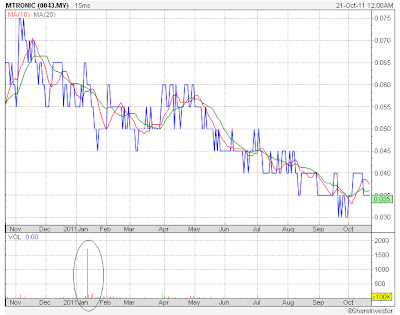 The black oval indicates the volume of the shares done at that day, it is sticking out like a sore thumb. It is even more interesting that that huge sale didn't depress the shareprice:

"The share price remained steady despite the large disposal on the open market. The share disposal may pave the way for the emergence of a major shareholder in the loss-making company. However, there was no announcement on new shareholders in Metronic at press time."

And indeed, there would be no announcement of a new major shareholder.

If they are really happy at this moment is another question, the price has dropped from 6.6 cent to 3.5 cent, a 47% drop since Dato' Abdul Gani Yusof sold his shares.

This trend of insider selling has been set in motion for a long time, in the year report 2004 the top 20 shareholders still held 85.1% of the shares.

A big issue with MTronic are the huge related party transactions and the ability to recover the long outstanding receivables from them, two clear red flags. This is from the 2004 year report, the first one since they listed:

And in the footnotes:

Up to year report 2008 Ernst & Young seemed to be ok with the situation, but in 2009 Ernst & Young wrote the following, a first warning, "emphasis of matter", without qualifying the accounts:

In the 2010 year report they changed their mind and qualified the accounts:

I am rather suprised about this statement, this has been going on since 2004 (the listing of MTronic), this was always a big issue. Ernst & Young are unable to obtain sufficient appropriate evidence about the timing of collection of these debtors, but these are mostly old receivables anyhow, so in previous years they did have sufficient evidence? Why did Ernst & Young change their mind?

Qualifying an account is a very serious red flag.

For seven years they had been the auditor and received their fees, I think that shareholders of MTronic deserve some more information from Ernst & Young what is going on.

In the last quarterly accounts (June 30, 2011) the amounts are still outstanding, RM 44.5 million to be exact.

"In relation to the related party receivables due from the Main Contractor Related Party, subject to the finalization of the claim certification by JKR and the subsequent disbursement of payment from the Ministry of Finance, the Company expects the outstanding receivables to be fully recovered through progressive disbursements to be made by the Government of Malaysia not later than 31 December 2011."

But the market does not seem to believe that, otherwise the share would not be trading at 3.5 cent, valuing the whole company at about RM 20 million only.

The total equity is RM 53 million, not much more than the amount outstanding, in other words if the amounts are not recoverable, there is hardly any equity left. In that case the issue is also if the profits that MTronic announced in 2004, 2005 and 2006 were "real", since they were based on the recoverability of these receivables. And those earnings supported the share price at much higher levels than today, during which the major shareholders sold their shares in the market.

In the mean time, MTronic is also involved in a five material litigations, another red flag.

On June 3, 2010 Dato' Abdul Gani bin Yusof was appointed Executive Chairman of Kenmark, a company in big troubles. On March 3 2011 Bursa Malaysia fined and reprimanded the directors of Kenmark.


"Notwithstanding that they were newly appointed, as directors, they should have exercised reasonable care and diligence. In this regard, they should have ensured that they were fully apprised of the state of operations and financial condition of the Company prior to the press conference on 4 June 2010 and issuing press statements about the Company. As directors, they were under an obligation to ensure all representations about the Company must be factual, clear, unambiguous, accurate, succinct and contains sufficient information to enable investors to make informed investment decisions and were balanced and fair with regards to the Company’s state of operations and financial condition pursuant to the listing requirements. This is more so in view of the turmoil and the need for clarity to the market and shareholders on the status of the Company at the material time."