I have blogged about this subject before:

"Why is it important to lodge complaints? Because without a complaint the Securities Commission might not take action, they might not know about the issue (there are more than 1,000 listed companies) and even if they know about the issue they might not be able to pursue each one. But when a serious complaint is lodged, they have to look into it, open a file and start a serious investigation. There are good people inside the Securities Commission, and although I have been (very) critical in the past, I do also see clear improvements."

I am strengthened by the following cases of two other institutions:

"Minister in the Prime Minister’s Department Datuk Seri Nazri Aziz told Parliament yesterday that no legal action would be taken against the anti-graft officers who drove Teoh Beng Hock to suicide as no police report has been lodged over the matter."


From the past, an article in the magazine "Accountants Today", July 2007, titled "Mini-Enrons shaking up Malaysia's Corporate Governance?" by Abdullah Zaimee. 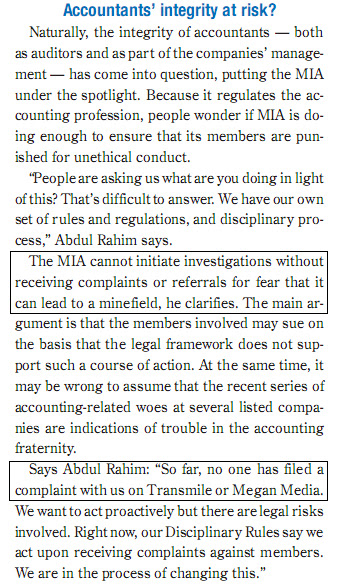 These words were spoken by Abdul Rahim Abdul Hamid, President of MIA (Malaysian Institute of Accountants). To put this in perspective, Transmile and Megan Media were both huge fraud cases. Megan Media's problems started March 2007 and in June 2007 the details of the massive fraud were reported. Transmile's problems started in April 2007 when it could not issue its year report on time. Later special investigators did indeed find huge inconsistencies in the accounts. But apparently, because nobody filed a complaint, although these cases were almost every day in the news, the MIA could not take any action. I really hope that in the mean time they have indeed changed their process.


In the most serious cases that I ran into, I have indeed lodged complaints with the Securities Commission (SC). If somebody else already filed a complaint about the same case, no problem, the complaints might strengthen each other. But if nobody has yet filed a complaint and the SC needs a complaint to come in to action (like in the above cases), they will have one and can swing into action. The investigation might take a while (I really hope that they can close 95% of the cases well within one year), but at least something will be done, and nobody can say that no complaint has been filed.

More information about filing a complaint: