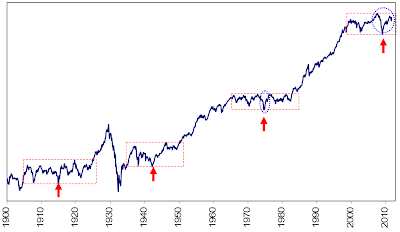 "There are three issues worth noting here plus one important caveat:

1. The long 10-20 year secular bear moves seem to have lots of major rallies and sell offs; the ups and downs are intense, but make little in the way of net progress. After 15 years, the average secular bear is essentially unchanged.

2. The roller coaster ride leaves investors psychologically exhausted. They come to forget the good times of so long ago, and believe there is no way out of the morass. Naturally, they are reluctant to believe in the new bull market once it begins.

3. The major bottom seems to occur about halfway through; this implies that the March 2009 lows will not be revisited (note I only wrote IMPLY and not guarantee or forecast!)  If we look at the current Bear versus the ’66-’82 (with lows like ’73-’74), it suggest that 8500-9000 on the Dow is possible, but barring another crisis 6500 is much less likely. And it also suggests that the next secular bull might begin around 2016-18.

Now for the caveat: We have but one century of data, and within that 100 year span, only four examples of long term secular bear markets. We really need 500-1000 years of data, 20-40 secular bears during the era of modern capital markets. That would allow us greater confidence that these four patterns aren’t merely coincidences.

The good news is that if the above graph is an indication, the secular bear market might soon be over in the US, which has implications for the Global share market as well. But the end of the bear market also might still be a few years away.

Warren Buffett has started to buy in a pretty big way. Getting the timing right is simply impossible, but in general when he buys there is profit to be made, although it might be on the horizon, and there might be moments in the future where shares are cheaper.

"Warren Buffett’s Berkshire Hathaway Inc. (BRK/A) invested $23.9 billion in the third quarter, the most in at least 15 years, as he accelerated stock purchases and broadened the portfolio beyond consumer and financial-company holdings."
﻿
Posted by M.A. Wind at 11:07