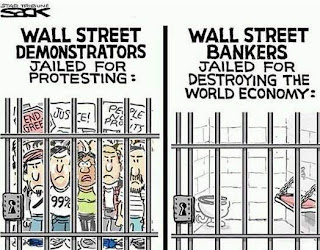 Societe Generale's Albert Edwards has a killer conspiracy theory for you.

For his latest Global Strategy Weekly note, Edwards decided to republish an article he first wrote in January 2010.  The title: Theft! Were the US & UK central banks complicit in robbing the middle classes? As usual, Edwards' note is entertaining. And this particular one has a timeless quality, so we are sharing some of it with you.

Edwards was so shocked by what he considered to be incompetancy by U.S. and U.K. central banks that he was willing to consider their actions as parts of a grand conspiracy.


Mr Bernanke’s in-house Fed economists have found that the Fed wasn’t responsible for the boom which subsequently turned into the biggest bust since the 1930s. Are those the same Fed staffers whose research led Mr Bernanke to assert in Oct. 2005 that “there was no housing bubble to go bust”? The reasons for the US and the UK central banks inflating the bubble range from incompetence and negligence to just plain spinelessness. Let me propose an alternative thesis. Did the US and UK central banks collude with the politicians to ‘steal’ their nations’ income growth from the middle classes and hand it to the very rich?
If true, how did they get away with it with no one noticing?

...Indeed, it has been amazing how little political backlash there has been against the stagnation of ordinary people’s earnings in the US and UK. Did central banks, in creating housing bubbles, help distract middle class attention from this re-distributive policy by allowing them to keep consuming via equity extraction? The emergence of extreme inequality might never otherwise have been tolerated by the electorate.
........
I recalled seeing another article from John Plender on this topic back in April 2008. His explanation for why there had been so little backlash from the stagnation of ordinary people’s income at a time when the rich did so well was simple: “Rising asset prices, especially in the housing market, created a sense of increasing wealth regardless of income. Remortgaging homes over a long period of declining interest rates provided a convenient source of funds via equity withdrawal to finance increased consumption”
.
So, what happens when the housing bubble bursts and people start to realize the income disparity?

Going forward, in the absence of a sustained housing boom, labour will fight back to take its proper (normal) share of the national cake, squeezing profits on a secular basis. For as Bill Gross pointed out back in PIMCO’s investment outlook ‘Enough is Enough’ of August 1997, “When the fruits of society’s labor become maldistributed, when the rich get richer and the middle and lower classes struggle to keep their heads above water as is clearly the case today, then the system ultimately breaks down.”. In Japan, low levels of inequality and inherent social cohesion prevented a social breakdown in this post-bubble debacle. With social inequality currently so very high in the US and the UK, it doesn’t take much to conclude that extreme inequality could strain the fabric of society far closer to breaking point.
Posted by M.A. Wind at 11:54