My attention was drawn to the following blog post:

This is about the development in the Proposed Disposal of the entire business and undertakings, including all of the assets and liabilities of APLAND.

APLAND has issued Notice of Adjourned Meeting and Letter to Shareholders on 8 Nov 2011.

Earlier in the Independent Advice Circular dated 8 October 2011, one of the considerations used as basis and justification for the Disposal was Price-to-book ratio (PBR) of Comparable Companies of AP LAND

Refer to page 22 of the circular, the Independent Adviser used the closing prices of comparable companies as at the Latest Practicable Date (LPD) of 28 September 2011.

However, about 1.5 months later, the FBMKLCI and KLPROP have appreciated 8% and 13% respectively and the PBR of comparable companies have on average appreciated 10%. 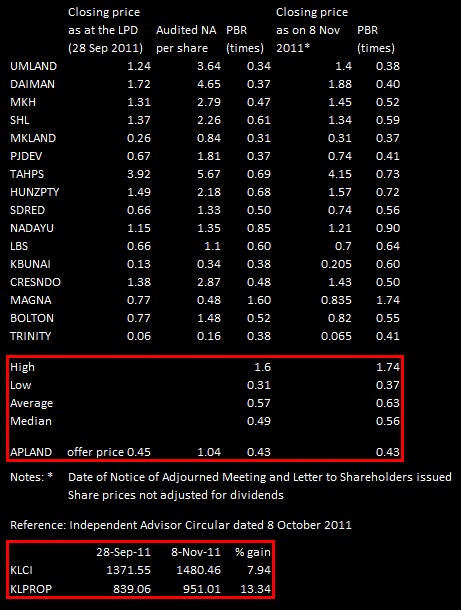 This makes the offer price of RM0.45/APLAND share even more unattractive.

With the same offer price, the offer has now become even more "unfair" from financial point of view. At this point in time, would the Independent Adviser, the Company Audit Committee and the non-interested Board Members still think the offer is "reasonable"?

Yes, I agree with the writer, the offer looks not fair and not reasonable to me. I have written about this disposal before, I haven't seen any effort whatsoever from the Board of Directors to try to unlock the value of the assets AP Land owns. Minority Shareholders are caught between a rock and a hard place: either accept an offer that is clearly unfair, or continue with management that is not unlocking the assets. This is an unhealthy situation that gives the Malaysian share market a bad name. The authorities (Bursa Malaysia & Securities Commission) really should look into this, minority shareholders deserve to be treated in a better way.
Posted by M.A. Wind at 21:09