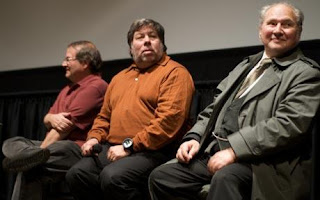 Ronald Wayne, the "third investor in Apple" sold his 10% share of the company for USD 1,500. The investment would now have been worth RM 46,000,000,000!
"US pensioner Ronald Wayne gave up £15bn slice of Apple" by Nick Allen.
It could rank among the worst business moves of all time. In 1976, Ronald Wayne decided to pull out of his friends' computer company after two weeks, fearing he could be saddled with debts if it failed.
After drawing up the original contract for the firm and designing its logo, he withdrew his 10 per cent stake and walked away with $1,500 (£975).

Speaking from his home in a remote desert town near Death Valley, Nevada, the little known "third founder" of electronics giant Apple said he has no regrets.

Mr Wayne, 75, relinquished a stake that would now be worth around £15 billion and lives on a state pension and deals in old stamps and coins to supplement his income.

Email ThisBlogThis!Share to TwitterShare to FacebookShare to Pinterest
Labels: Apple