Shareholder activism is still very rare in Singapore (or Malaysia for that matter), so if it happens, we have to take note.

On the other hand, the Annual Distribution per Unit paid to us DROPPED FROM 9.38 CENT TO 6.85 CENT in the same period.  We need to do something fast!!!

The share price of Sabana, which has performed badly: 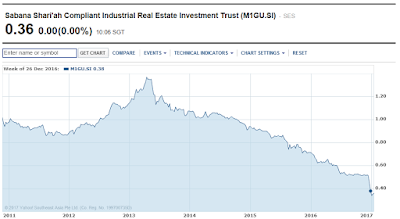 The share price fell further after recently a rights issue was announced. With the money form the proposed rights issue new properties will be acquired which will (I assume) increase the management fees even further.