Sime Darby: what happened after its merger?

I am sure we will be overwhelmed in the next months by sleak PowerPoint presentations and the like, full with jargon like "unlocking of value", "strategic repositioning", "win-win situations", "maximizing shareholders value", "refocussing exercise" etc.

But ten years ago Sime Darby also went through a large restructuring (the merger with Guthrie and Golden Hope), also with sleak PowerPoint presentations, and the results of that exercise are definitely underwhelming.

Sime Darby's share price has performed very poorly, and is even below the level of 2007: 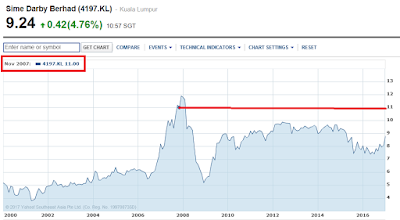 Most likely that can be explained by looking at the revenue and especially profit numbers over the last five year:

That exercise in 2007 must have cost a few hundred million RM, that is quite a nice and tidy amount of money that could have been spend on something else, possibly more useful.

Before Sime Darby jumps into the next restructure (which again will cost quite a bit of money, I assume), can we please get a honest, hard look at what was promised in 2007, and what actually was achieved in the next ten years? For instance, what happened to the promised synergy and economy of scale? Which party actually benefitted of that merger? Was it may be only the advisors and the bankers who came out ahead, charging juicy fees?