Are auditors above the law?

Sometimes I really wonder why auditors seem to escape scrutiny, again and again.


There is a discussion going on: auditors are watchdogs, not guard-dogs, so they can't be held liable for anything that might be wrong with the accounts. That is a fair comment I guess.


On the other hand, they should do their work in a correct way, do sample testing, have an open, critical mind about what they investigate etc. When things turn sour in a big way, they should therefore be held accountable. But somehow or the other, that doesn't seem to happen.


In Malaysia I can't remember any auditor of a listed company being punished in one of the big accounting scandals. It appears Malaysia is not the only country where that happens.


Below article from the New York Times is about the huge Olympus scandal in Japan, huge in the amount of money involved, the number of years that the fraud was ongoing and probably the number of people who must have been involved or had knowledge about it.


There are also very serious Corporate Governance issues at play. For instance in the Board of Directors firing the CEO who discovered the fraud, the typical "shoot the messenger" syndrome that is (unfortunately) also quite common in Malaysia.


And what did the company say?


"Olympus, the Japanese camera maker whose executives have admitted to covering up $1.7 billion in losses, said Tuesday that its auditors, KPMG Azsa and Ernst & Young ShinNihon, had not been complicit in the false accounting"


But this is what an expert said:


“It’s hard to believe that Olympus could have kept such a large-scale cover-up secret from its auditors, who study its finances intimately,” said Shinji Hatta, a professor of auditing at the Graduate School of Professional Accountancy at Aoyama Gakuin University in Tokyo.


In the first paragraph a possible motive for the actions of Olympus:


Any action to dismiss or sue Ernst & Young ShinNihon, its current auditor, could leave the company without a firm willing to audit its finances, jeopardizing Olympus’s compliance with the exchange’s listing requirements.


This doesn't sound right at all. 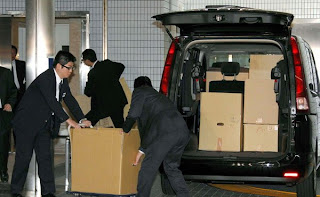 A decision to clear the auditing firms could strengthen Olympus’s chances of staying listed on the Tokyo Stock Exchange, helping the company maintain access to equity capital. Any action to dismiss or sue Ernst & Young ShinNihon, its current auditor, could leave the company without a firm willing to audit its finances, jeopardizing Olympus’s compliance with the exchange’s listing requirements.

Still, experts have asked how Olympus could have perpetrated such a scheme without at least tacit knowledge by its auditors. KPMG audited Olympus until 2009 before handing it off to Ernst & Young. The two firms still face possible sanction by Japan’s Securities and Exchange Surveillance Commission.

Just how much Olympus’s auditors knew about the manufacturer’s scheme, going back decades, to hide losses has emerged as an important aspect of the continuing investigations into its finances. The two firms signed off on the accounts before Olympus’s president and chief executive, Michael C. Woodford, blew the whistle on the fraudulent accounting in October, just after he was fired by Olympus’s board.

“It’s hard to believe that Olympus could have kept such a large-scale cover-up secret from its auditors, who study its finances intimately,” said Shinji Hatta, a professor of auditing at the Graduate School of Professional Accountancy at Aoyama Gakuin University in Tokyo.

In a report released last month, an investigative panel appointed by Olympus, which makes digital cameras and the medical optical devices like endoscopes, had been critical of the auditors’ role, saying the firms had not done enough to expose wrongdoing.

But a separate panel of lawyers hired by Olympus to investigate the roles of the two auditors found that the firms had not violated their fiduciary duties, Olympus said in a statement. That report, released Tuesday, said that Olympus’s executives had so cleverly buried the losses that external auditors could not have uncovered them.

The report instead blamed five former and current Olympus internal auditors for allowing the company to misstate its finances. The five internal auditors are responsible for a total of 8.4 billion yen ($109 million) in costs related to the cover-up, Olympus said.

Minoru Ota, a former internal auditor who had headed the company’s accounting unit, is to blame for almost half of that cost, the statement said.
“The masterminds in this case hid their illegal acts through artful manipulation of expert opinion,” the report said.

Olympus did not make Mr. Ota available for comment, and calls to a registered number under that name in Tokyo went unanswered.

The company said later Tuesday that it had filed a lawsuit against all five of the internal auditors, demanding 500 million yen from each.

Olympus has admitted that a handful of former and current executives set up a scheme to obscure losses by illicitly keeping unprofitable assets off its books. The company later tried to settle those losses in payments masked as merger-and-acquisition fees.

Last week, the company sued 19 current and former executives, including the current president, Shuichi Takayama, over their roles in concealing the losses. The scandal has led to investigations by the authorities on three continents, and Olympus shares remain on watch for possible delisting on the Tokyo exchange.

But a person with close knowledge of various investigations relating to Olympus said that not only was Olympus adept at hiding its losses, but that the company might have received help from its banks misstate its financial position.

KPMG received confirmation statements from Société Générale and Commerzbank that, with hindsight, were clearly misleading, the person said on condition of anonymity, saying he was not authorized to speak to the media.
Those inaccurate statements have been submitted by KPMG to Japanese regulators to aid in their inquiry, and the authorities have begun a broader review that is likely to include the conduct of Olympus’s banks, the person said.

“Société Générale’s policy is to fully and strictly comply with all regulations and laws in the countries where it operates,” the bank said in an e-mailed statement. “As always, Société Générale will cooperate with the relevant authorities if needed.” Commerzbank did not respond to calls seeking comment. Olympus’s third European bank, LGT of Liechtenstein, has not been linked to misleading statements.


Hiroko Tabuchi reported from Tokyo and Keith Bradsher from Hong Kong.
Posted by M.A. Wind at 09:14