Maxbiz CEO: “RM 50 million is nothing to shout about”

“Frankly, earning about RM 50 million over five years is certainly nothing to shout about for a public listed company”
Where these words uttered by one of the Malaysian captains of industry, whose companies routinely make billions a year? Not exactly, the words are from Datuk Vincent Leong, CEO of Maxbiz.
I found the above quote in The Edge of January 9, 2012 “Will Maxbiz make it this time around?”
Many shareholders of Maxbiz must have lost money, I am sure they would have wanted to see Mr. Leong actually making RM 50 million profit for the company, instead of just talking about it.
Maxbiz is a garment manufacturer with a rather patchy past, it has lost money in each of its last seven years, has huge accumulated losses (RM 107 million to be precise). It tries to turn around its business through a fibre–optic connection project, projected at RM 510 million. Next to that, it also plans to go in property development. Rather ambitious ideas for a garment maker.
I had a look at its latest 2010 year report. 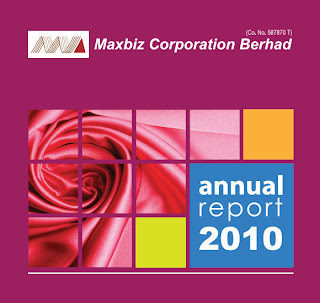 Unfortunately, the cover is the only nice part of the whole report.
An errata of six pages is added containing dozens of corrections, not exactly the hallmark of a company that takes pride in its work.
It is hard to find a company with more red flags than Maxbiz:
[1] Personal changes:
[2] Maxbiz and five directors received public reprimands and fines:
[3] The company is involved in numerous court cases.
[4] Directors own not even a single share:

[5] The accounts of Maxbiz are qualified (both off the company itself and some of its subsidiaries), just two statement from the auditors:
[6] Maxbiz appointed Ferrier Hodgson MH Sdn. Bhd. As Investigation Advisor (IA) on 24th February, 2010 to investigate if there were any irregularities and anomalies during the Geahin debt restructuring exercise.
The first of 4 parts of the report was presented to the Audit Committee and the Board of Directors on 28th April, 2010. As announced to Bursa Malaysia Securities Berhad on 30th April, 2010, the contents of the report from Ferrier Hodgson MH Sdn. Bhd. indicates that there is fraud, deception and misrepresentation.
[7] Maxbiz has a “special status” in several ways, but not the ones you like to see:
"Ze Moola" wrote a few interesting articles about MaxBiz:

http://www.whereiszemoola.blogspot.com/search/label/Maxbiz
Yet, dispite all the gloom, the share price suddenly took off: 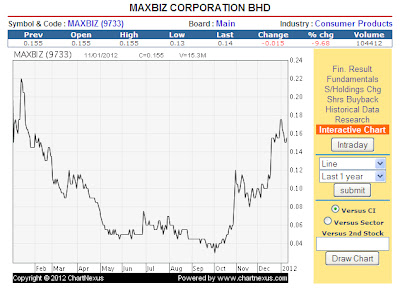 The buyers must be quite positive about the future of this company. If this is based on any realism, time will tell …..
A strange coincedence is the fact that SJ Asset Management was the 2nd largest shareholder of Maxbiz, an asset management company being examined closely by the Securities Commission (SC) due to irregularities in its accounts.
http://biz.thestar.com.my/news/story.asp?sec=business&file=/2010/7/7/business/6618258
“It was reported by a weekly that SJAM managing director Whai Onn Tan had gone missing, together with several million ringgit from the company.”
It is rather strange to see an asset manager investing in a company like Maxbiz with such poor fundamentals.
When things were still going better with SJ Asset Management, its boss joined in a charity raising event:
http://vimeo.com/8536328
Event Highlight Video l Live To Love Charity Event from U Arte`House 優藝製作 on Vimeo.
Posted by M.A. Wind at 20:09