On January 3, 2012 Mulpha International (Mulpha) was reprimanded by the Securities Commission:

The description of the misconduct was rather vague, to say the least:

In what way was it not consistent? The rights issue in 2010 was a massive 1-for-1 exercise worth almost RM 500 million in which the the market capital of the company would almost double. If anything was wrong with that exercise, surely the minority shareholders deserve a clear explanation.

An article in The Star of today sheds more light on this issue:

By JOHN LOH
PETALING JAYA: Mulpha International Bhd's directors are disappointed at a reprimand from the Securities Commission (SC) that claimed the property developer failed to disclose information in a 2010 prospectus in “a full and true manner.”

Mulpha said in a statement that it would write to the regulator for further clarification before considering its next course of action, which may include an appeal.

“The company fully cooperated and provided all required information to the SC when queried on Sept 30, 2010.

“The company is also disappointed that this matter has been announced without giving the company the benefit of its 30-day right to appeal the decision,” it said.

The SC had on Wednesday posted the reprimand on its website, saying Mulpha's actions had breached Paragraph 1.03 of its guidelines for abridged prospectuses.

Essentially, it described Mulpha as inconsistent in the way it allocated the excess rights shares to what was disclosed in the abridged prospectus.

Mulpha's abridged prospectus, which was issued on Feb 24, 2010, was for a renounceable one-for-one two-call rights issue of up to 1,526,559,774 new ordinary shares of 50 sen each. However, the rights issue was undersubscribed, raising only RM471.2mil.

Its board said it believed the SC's reprimand specifically related to the manner in which it had allocated the excess rights shares to shareholders and renouncees who applied for them.

In its defence, the company explained that there was a minority of shareholders and renouncees, many of whom held a miniscule number of shares at the entitlement date, who applied for the excess rights shares at unusually high multiples, some even up to thousands of times what they were entitled.

“Two renouncees, for example, put in excess rights shares applications of 29,999 and 598,000 times of their initial entitlements.

“The directors of Mulpha, after receiving formal legal advice and invoking the authority granted to the Board in Section 4.4 of the abridge prospectus, fixed the allocation of excess rights shares to all applicants to generally 10 times of their initial entitlements.

“The board exercised its rights as it believed these extremely high excess applications could potentially give rise to adverse and irregular trading in its shares post the completion of the capital raising, which would be detrimental to the interest of the company.

“It could also potentially reduce the number of excess shares allocated to the remaining shareholders and renouncees who had put in excess applications that were not grossly and artificially inflated,” it pointed out.

Mulpha added that while the reprimand was given to the present board, Datuk Yusli Mohamed Yusoff and Caesar Loong were not directors at the material time when the abridged prospectus was issued.

“Furthermore, as the underwriter to the rights issue was the company's major shareholder in which Lee Seng Huang has an indirect interest, Lee consequently abstained, as required by law, from the board's deliberations on the formula to allocate the excess rights shares,” it said.

Through various investment holding companies, Lee and his family have an indirect 35% equity interest in Mulpha, based on its latest annual report.

Why did Mulpha not announce the above when they published the allocation? Here is the allocation table from the website of Bursa Malaysia: 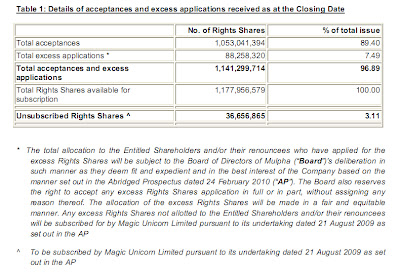 What probably happened is that some shareholders put in large applications for excess rights shares, these amounts were strongly reduced, but when these shareholders later checked on the Bursa Malaysia's website it turned out that the rights issue was actually undersubscribed (even including the applications for excess rights shares) and that the unsubscribed rights shares (about 37 million) were allocated to Magic Unicorn Ltd, linked to the majority shareholders. After seeing this they probably filed a complaint with the Securities Commission.