Golden Plus or Golden Minus?

Good article in The Star ("Missing Numbers") about Golden Plus Holdings, not having issued a financial statement for many years:


"If you like numbers, here are some to crunch on. They’re all related to Golden Plus Holdings Bhd (GPlus) and the fact that the counter has been suspended for years because it has not lodged a financial report with the stock exchange since February 2011.

Let’s start with this – 1,742. That’s the number of days (including today) that there hasn’t been any trading of GPlus shares. Bursa Malaysia imposed this suspension on Aug 3, 2009, after GPlus had missed the deadline for the release of its audited financial statements for the year ended Dec 31, 2008.

The audited accounts for 2008 and 2009 were finally issued in July 2010, but the suspension hasn’t been lifted because GPlus still has a long list of outstanding financial reports.

Naturally, this dismal record has resulted in Bursa Malaysia taking enforcement action, which leads us to more numbers.

Since the suspension, GPlus has been publicly reprimanded four times. Its directors have been similarly penalised twice and have been fined a total of RM1.52mil.

Despite all this, there’s no sign of an end to the drought of information. On April 30, GPlus told the exchange that “there is no change or further development in the status of issuance of the outstanding financial reports”.

The latest news – if you can call it that – about GPlus is an investor alert announcement on the Bursa Malaysia website yesterday to say the company has failed to submit its 2013 audited accounts.

While it’s mildly amusing to note that the GPlus case has yielded a set of numbers precisely because of the company’s lack of publicly available numbers, it’s no laughing matter that such an example of poor governance and appalling transparency has dragged on for so long.

It’s understandable that the authorities want to see the GPlus financial reports before acting further, but the resolution has to come soon. Every day that this is delayed is another day that the listing rules are subject to mockery." 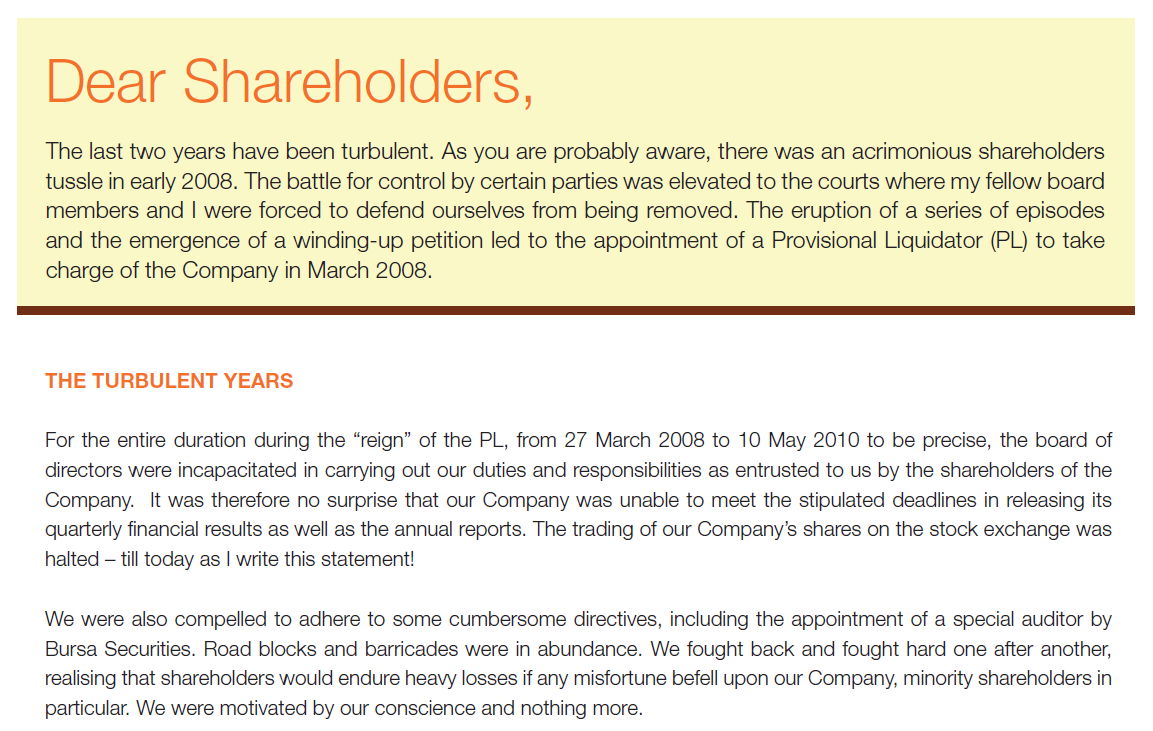 Apparently the Board of Directors was not too happy being reprimanded and fined. Did the above "complaint" help? Not really, two more reprimands and a large fine followed, on June 22, 2011 and January 16, 2012.

With the last reprimand being issued more than two years ago, may be it is time for a new enforcement?

Some information about the court cases of the past can be found in an article from Shearn Delamore and Co: "Removal of Directors in Public Company".
Posted by M.A. Wind at 12:19