POSH, GOSH and the Mexican Mess

I have written several articles about POSH and its IPO, but not much about its problems in Mexico.

In short, POSH invested in a Joint Venture GOSH, which chartered eight vessels to a company named Oceanografia. This last company appears to be involved in a massive fraud.

A recent article by DealBook: "Citi Fires 11 More in Mexico Over Fraud"

"The fraud involving loans to Oceanografía — which depended on the government-owned oil company for nearly all of its business and has a well-known history of questionable finances — point to a potential weakness in controls. Whether Citigroup willfully ignored possible warning signs is the subject of an investigation by the F.B.I. and prosecutors from the United States attorney’s office in Manhattan.

The question at the heart of this case is why Citigroup ever did business with a company like Oceanografía. The company, which supplies marine engineering services to Pemex, Mexico’s government-owned oil monopoly, is known among Mexican investors as politically connected but financially troubled. Credit rating firms in the United States, corporate bond investors and Mexican lawmakers have raised concerns about Oceanografía.

In 2009, United States ratings firm Fitch warned about Oceanografía’s high leverage and poor cash flow generation. Fitch eventually withdrew its ratings because the company was not supplying enough information. In 2008, Standard & Poor’s noted that Mexico’s congress had investigated accusations of improper deals between Oceanografía and Pemex, though no wrongdoing was proved."


The same question can be asked to POSH, why did its joint venture GOSH do business with a company like Oceanografia? In SouthEast Asia POSH is playing a "home game", but in Mexico an "away game", is it possible that POSH went outside its comfort zone?

More information can be found in an article by Investor Central:

"Can POSH recover US$109.8m from its Mexican partner?"

Some important questions are asked:

1. Did GOSH make any other investment in the joint venture?

2. If Mexican bankers were not willing to lend money to GOSH, then why did POSH take the risk of lending?

3. What due diligence did it perform before extending the loan to GOSH? As security for the loan, it has share pledge agreements with the two Mexican shareholders of GOSH (representing 50 per cent interests in GOSH) and mortgages over the six vessels owned by GOSH.

4. What is the interest charged to GOSH for the remaining US$109.8 million?


Another interesting article can be found on the site of a blogger who calls himself "Rolf Suey" and who seems to be very knowledgeable about the industry:


Yesterday POSH made an announcement to SGX that it has to write off a further USD 4.6 million, and about the legal proceedings. 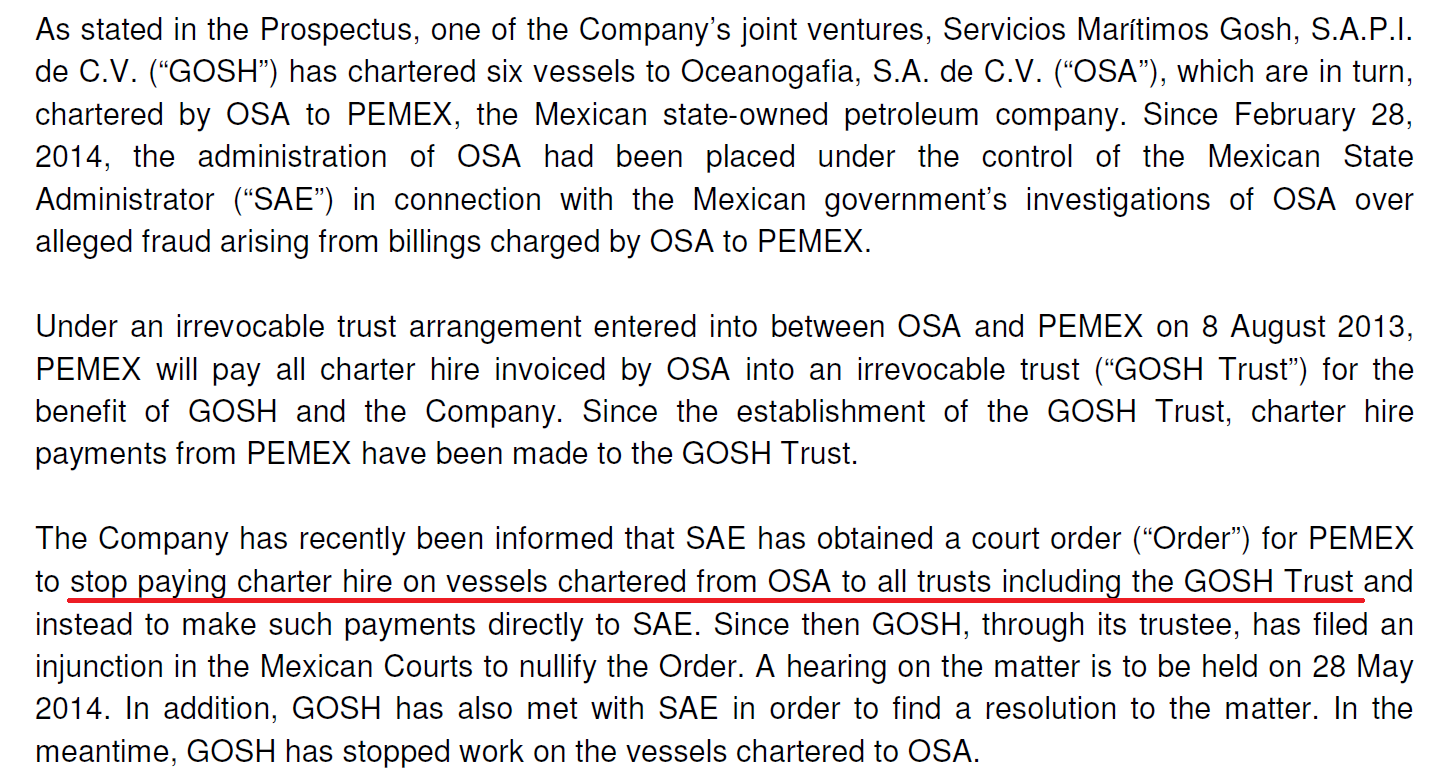 On the Malaysian side, Maybulk has not yet announced how many shares of POSH it actually has bought at the IPO of POSH. The amount of money involved is large (around RM 200 million), and it is a Related Party Transaction, so one would have expected the company to keep its shareholders up to date.
Posted by M.A. Wind at 09:29