Blast from the Past: Pan-Electric (3)

I wrote before about the Pan-Electric scandal, here and here.

I wrote before about the divorce battle of Khoo Kay Peng and Pauline Chai, here and here.

As expected in a bitter separation, lots of mud is being thrown at each other.

This blog usually doesn't focus on toilet seats nor about the number of shoes that one person has (Telegraph).

But another, more interesting revelation reveals a new link between the two above cases. From the Malaysian Insider website:


Billionaire Tan Sri Khoo Kay Peng had asked for a Canadian citizenship in the 1990s to avoid arrest by the Singaporean authorities, which was investigating a company belonging to him in the island state, his wife Pauline Chai told the High Court here today. Speaking during the couple’s highly publicised domicile trial here, the former Miss Malaysia claimed that Khoo had wanted to apply for permanent residency in Canada because the country had no extradition co-operation with Singapore. She said the tycoon had then feared for his life after some of his colleagues were arrested by the Singaporean authorities over allegations of mismanagement involving his company, Pan Electric Industries. “We had first stayed in Australia but when the Pan Electric fiasco (happened), two of his friends got investigated so we moved to Canada because they had no extradition laws there.

According to her affidavit that was sighted by Malay Mail Online, Khoo’s lawyers had first advised him and his family to move to Australia, where he, Chai and his children eventually settled down. But Chai claimed her husband fell into depression, as he was not certain if Australian laws could still prevent him from being extradited to Singapore.


This seems to be a new twist in the Pan-Electric case. What was known is the below information.

There are references in this newspaper clip from the Straits Times, some snippets: 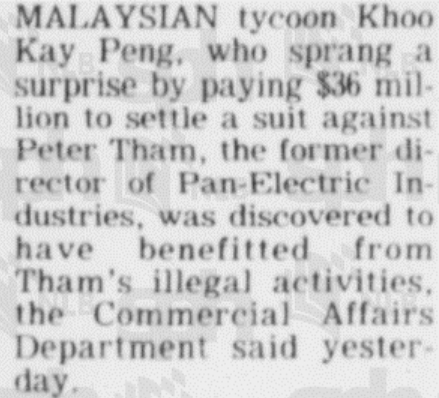 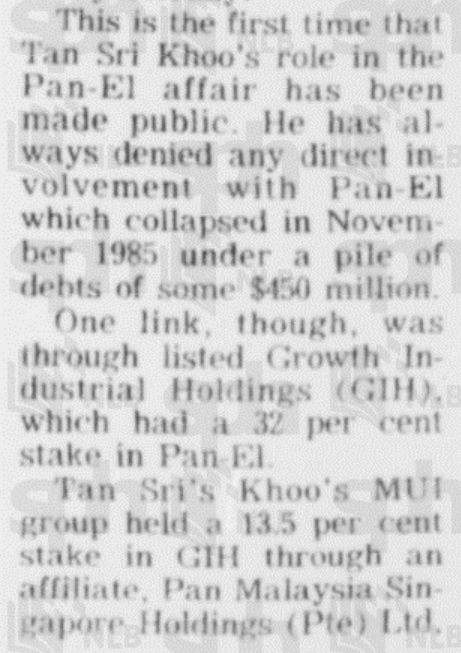 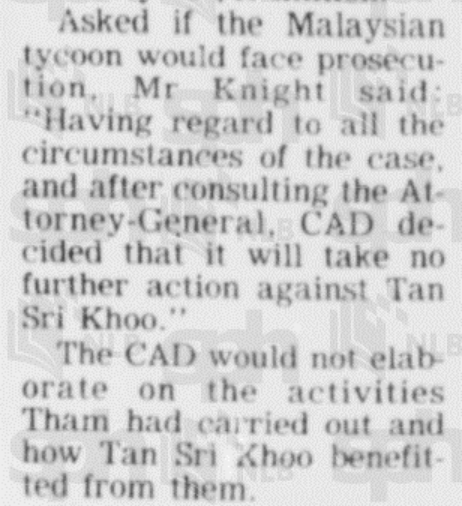 A detailed article from The Ant Daily can be found here:

It appears that, due to the high-profile divorce case, the high-flyer is not that much forgotten anymore. If he likes that kind of attention is another matter.

The Pan-Electric case still seems to attract quite some attention, after all those years. And probably rightly so, it was the only case that brought the share markets of both Singapore and Malaysia to a halt for three days.

Email ThisBlogThis!Share to TwitterShare to FacebookShare to Pinterest
Labels: Blast from the Past, MUI, Pan-Electric, PMCorp, PMI