The nightmare of every analyst: posting a buy recommendation and immediately the share tanks due to some news.

On November 20, 2014 Deutsche came with a "Buy" recommendation for MOL Global: 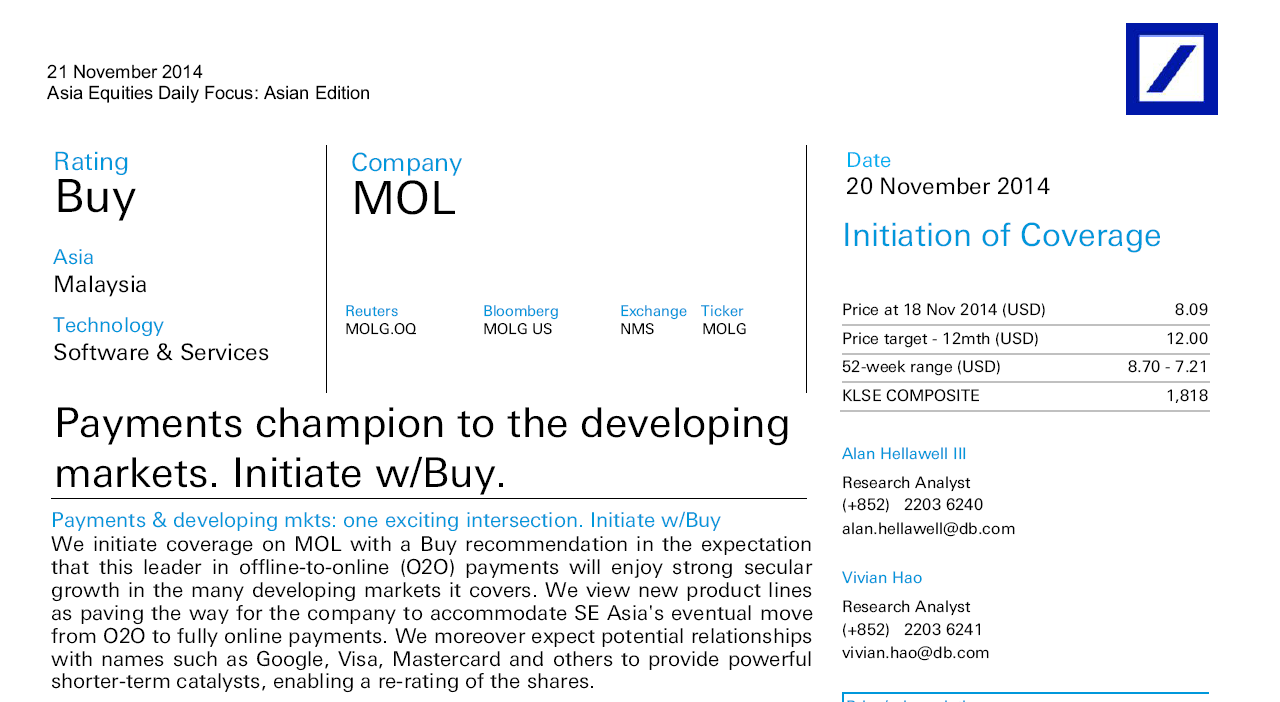 And the next day already they had to come with an "Alert", although they did stick to their recommendation: Deutsche was one of the IPO underwriters, according to SeekingAlpha.


The 40-day quiet period on underwriter analyses that began with the October 2, 2014 IPO of MOL Holdings Inc. will come to an end on November 13, allowing the firm's IPO underwriters to publish analyses of the of the company on November 14.

MOLG's share prices may see a brief rise, in response to the release of the underwriter opinions.

MOL Holdings IPO underwriters, including Citigroup Global Markets, Credit Suisse Securities, Deutsche Bank Securities, UBS Investment Bank and CIMB Securities, will seek to capitalize on the stock's recent growth through the release of positive reports beginning with the conclusion of the quiet period.


An insider informed me that the above research might have been outsourced by Deutsche to a third party research provider.

Valuation-wise, we can see from the above Deutsche link that at USD 8.86 the company was trading at an expected PE of 86 times. That has come down of course since the share price crashed.

But that would also imply that the company IPO-ed on a forward valuation of 121 times. That is if the company indeed makes a net profit of RM 21.2 Million, as forecasted.

The profit in 2013 was RM 12.2 Million, meaning that the IPO price on the realized profit was a whopping PE of more than 200 times. A sky-high valuation in which everything has to go perfect.

I wrote before about Mark Chang (here and here), founder of Jobstreet. Mark is linked to MOL Global since he had agreed to be on the board of MOL Global.

For more information what MOL Global is doing, here is a presentation.
Posted by M.A. Wind at 09:49