I guessed that the letter from the City of London would have settled the matter, but I was wrong.

According this article on the website of The Sun, Tan Teng Boo has reacted to the letter, some snippets (emphasis is mine):


"Share owners are still not able to make an informed decision as the reasons given by City of London are inadequate, baseless and utterly weak," he said.

He said the fact that the letter was not addressed to the share owners shows that the foreign fund had no intention to clarify their position to all share owners of the fund and called upon City of London to revise and substantially improve its standards of corporate governance.

"The letter by City of London is a clear testament of the foreign fund's lack of integrity. By giving such superficial reasons for the opposition of Resolution 4, the foreign fund makes a mockery out of the other 3,400 share owners."


I am really speechless. Mr. Tan is not even a member of the Board of Directors of iCapital, he is an interested party in this all, being the fund manager who received more than RM 6 Million in fees over the past one year alone.


According to Tan, his views were supported by the Minority Shareholder Watchdog Group, whose CEO Rita Benoy Bushon said that best practices encourage shareholders, especially institutional shareholders, to explain their reasons for opposing a director's re-appointments, especially independent directors.


Well, City of London did explain their reasoning, my guess would be that the MSWG is ok with that. And I strongly doubt that MSWG agrees with the aggressive tone of the first paragraphs, especially the underlined parts.

Tomorrow the adjourned AGM will be held, MSWG is usually present (and vocal) on those meetings, I am very interested what their opinion is in the above matter.

I think Mr. Tan went way too far in this matter, and that the Board of Directors of iCapital should significantly step up their game.

I have written before about the persistent discount to the NAV of iCapital's share price which has lasted already for about six years, which did coincide with the underperformance of the fund over the same years.

In the IPO documents (mostly here and here) detailed ways are described to deal with the discount. I am puzzled why the Board of Directors of iCapital has not taken any active measures regarding this matter (except for a one-off dividend). Some snippets of the IPO document from 2005 (CEF is Closed-End Fund): 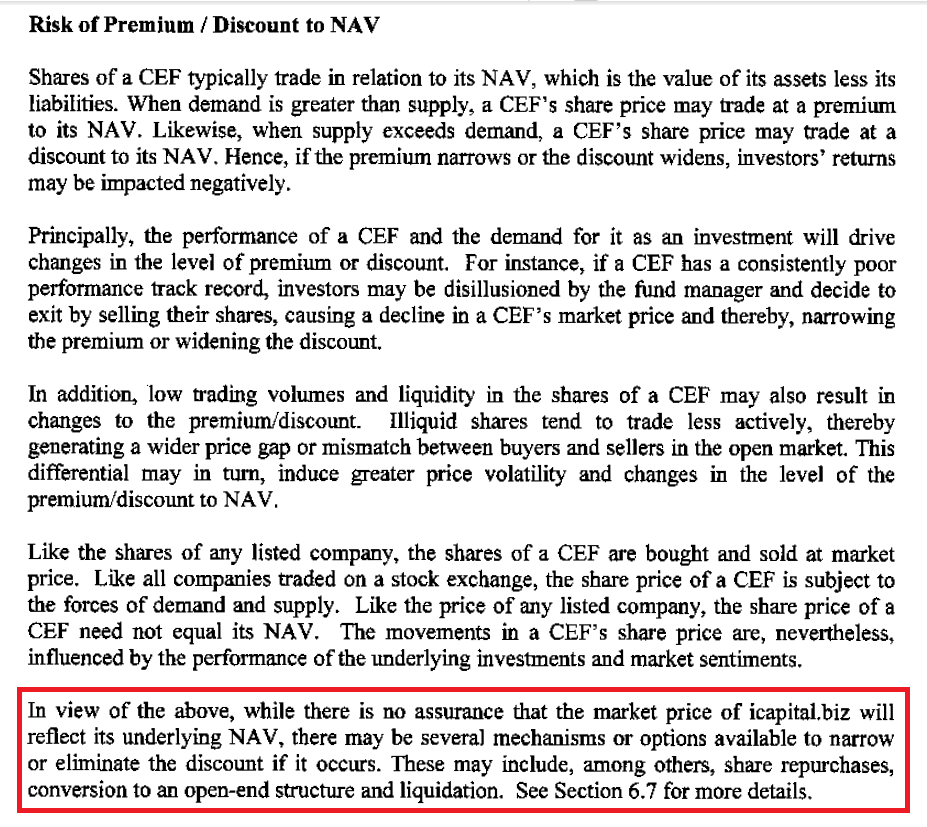