Kian Joo Can and Can One

A long time ago (around 20 years ago) I bought some shares in Kian Joo Can Factory, good company, well run, focused, paid a decent dividend, strong balance sheet, etc. I must have sold the shares some time later, and then later the family troubles started. That is never good for business, is my experience, these troubles can be quite emotional, which might not be the best state of mind to take rational business decisions.

I often lamented two issues regarding take-over offers in Malaysia:

In Kian Joo's case, Christmas came early, since both these issues did apply, very rare for the Malaysian corporate scene:

The announcement can be found here:


"Kian Joo wishes to announce that Dato’ Anthony See Teow Guan (“Dato’ Anthony See”) has declared that he is now against the Proposed Disposal. Dato’ Anthony See’s reason for the change of decision is in light of the letter of interest that was received from Toyota Tsusho Corporation."


It is rather puzzling why Kian Joo not simply stated the reasons for Anthony See's stand. Surely, from a CG point of view, it is best to be transparent and publish the reasons as soon as they are available?

Yesterday Kian Joo's AGM was held, these are the results of the voting: 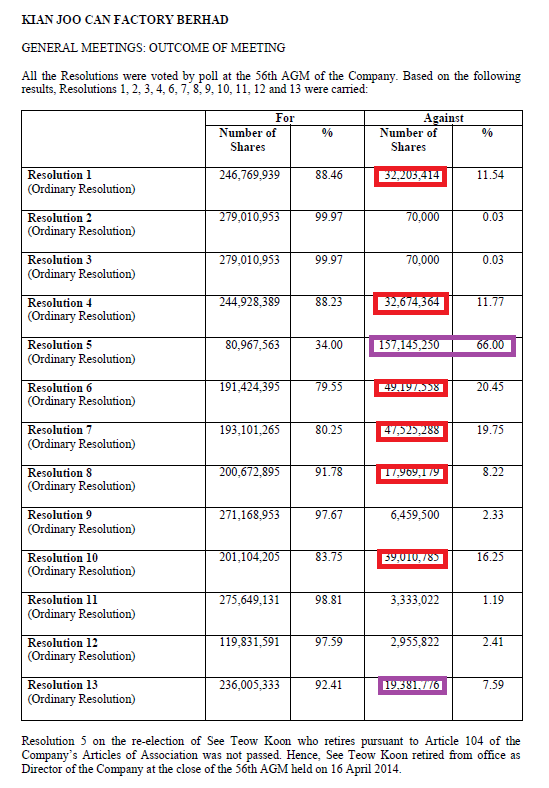 First of all, all resolutions were done by poll, and the detailed voting is announced, that is very transparent.

Secondly, the 5th resolution was not passed, which means that See Teow Koon was not re-elected.

Thirdly, it can be seen that quite a few other resolutions (in red) had tens of millions of votes (shares) against them. Although these resolutions did pass, the opposition has been noticed.

Bursa Stock Talk wrote an interesting posting on his blog, whether Can One should be allowed to vote on the asset disposal or not. These kind of asset disposals have to be approved by 75% of the votes, which could make it interesting.
Posted by M.A. Wind at 10:52

Email ThisBlogThis!Share to TwitterShare to FacebookShare to Pinterest
Labels: Bursa Malaysia, Can One, Kian Joo