What is happening to the Chinese Renminbi?

The Chinese Renminbi used to be a "one-way bet", the currency slowly but surely appreciating against the USD.

And that sounded quite logically, given that the Chinese economy is growing the fastest of all the major economies in the world.

But that pattern seems to be broken recently: 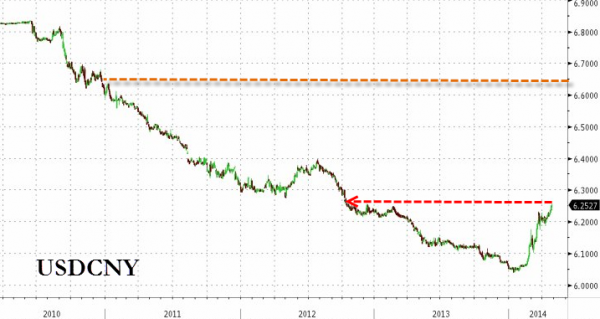 "Someone Is Betting That The Chinese Currency Collapses By The End Of 2014?"

here is CLSA's Russel Napier on what the long-term fate of the Renminbi will be:

“Mercantilist alchemy transmutes China’s external surpluses into foreign exchange reserves and renminbi. But with capital outflows from China at record highs, those surpluses are only maintained due to its citizens’ foreign-currency borrowing. Bank-reserve and M2 growth are already near historical lows and are driving tighter monetary policy. This will lead to severe credit-quality issues and force the authorities to accept a credit crunch or opt for a major devaluation of the renminbi. They will do the latter; and despite five years of QE, the world will get deflation anyway.”