Tying up some loose ends in this posting.

First a general issue, that is often overlooked in corporate exercises. If company A buys into another company B, and the price is roughly what is estimated to be fair, should company A proceed?

In my opinion the answer is a clear no, because of the following reasons (which partly overlap):
All the above reasons do apply to the Maybulk/POSH case.

In Maybulk/POSH: What happened to the Cash? I suggested that the cash (close to RM 700,000,000) that Maybulk injected into POSH was almost immediately transferred to PCL, it's parent company, to settle loans.

Also, I wrote that the purpose should have been included in the circular, simply because of common sense and transparency requirements, but also because it is described in the regulations.

I have received confirmation that the money was indeed transferred to PCL.

Maybulk seemed to defend itself, that there was a mentioning what would happen with the money. It referred to the following paragraph in the Independent Report by KPMG: 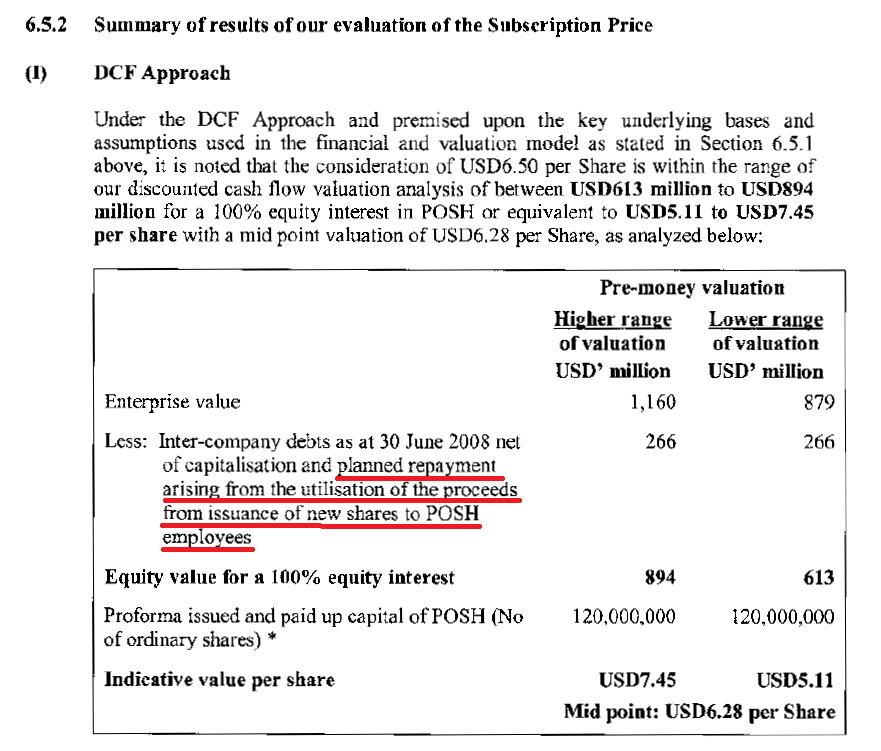 I am sorry to say, the above describes a repayment of the proceeds of issuing a (relatively small) amount of shares to POSH employees which would take place before Maybulk would buy POSH's shares.

It does not describe what would happen with Maybulk's cash injection.

But even if it would, the paragraph is a description of the DCF approach inside a summary of the evaluation of the Subscription Price. That does not exactly look like the right place to describe the purpose of an injection of money. Both in the general part (by AMinvestment Bank) and the Independent Advice (by KPMG) there were suitable places to describe the purpose, and also to give a lengthy opinion about it.

Repaying back interest free loans is not exactly helping the company to grow, POSH could have for instance bought distressed assets at a huge discount.

Describing the purpose of a capital injection is clearly defined in the rules, so it appears that the rules have been breached.

Unfortunately, it is quite normal in corporate deals that shareholders do not to receive alternatives. For instance, shareholders of Maybulk could only decide to buy into POSH or not.

But there was a very clear and good alternative: distribute the same amount (almost RM 800,000,000 in total; RM 0.80 per Maybulk share) in dividends and let all shareholders decide themselves where to invest the money in. That would have been a nice alternative, and I guess most investors of Maybulk would have been very happy receiving such a bumper dividend, especially since share prices of all companies were very depressed.

If they had reinvested it in Bursa Malaysia listed companies, they would have been sitting on a capital gain of (on average) 111%: 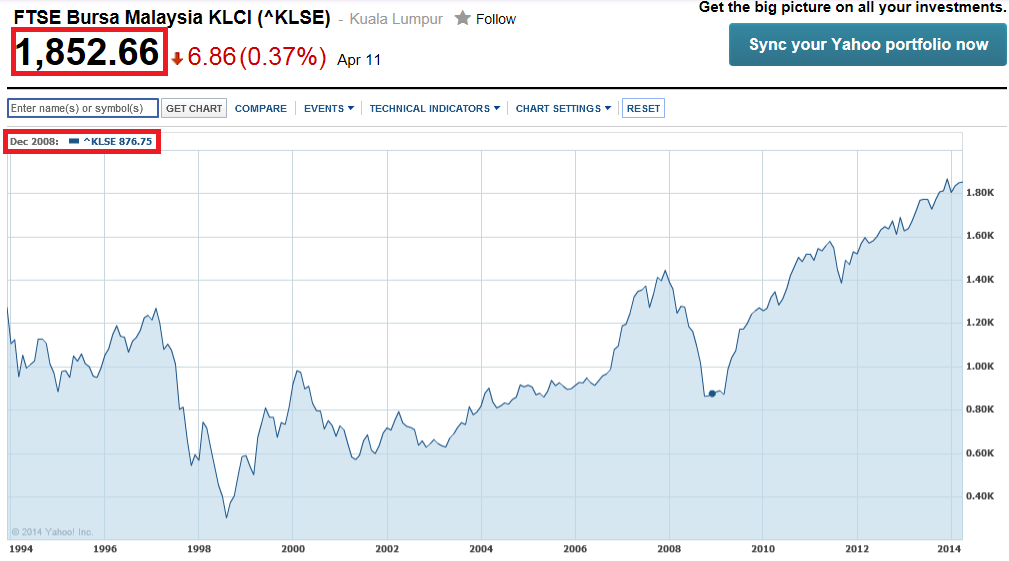 I strongly doubt that POSH has increased 111% in value, but for sure Maybulk itself massively underperformed the KLSE index. 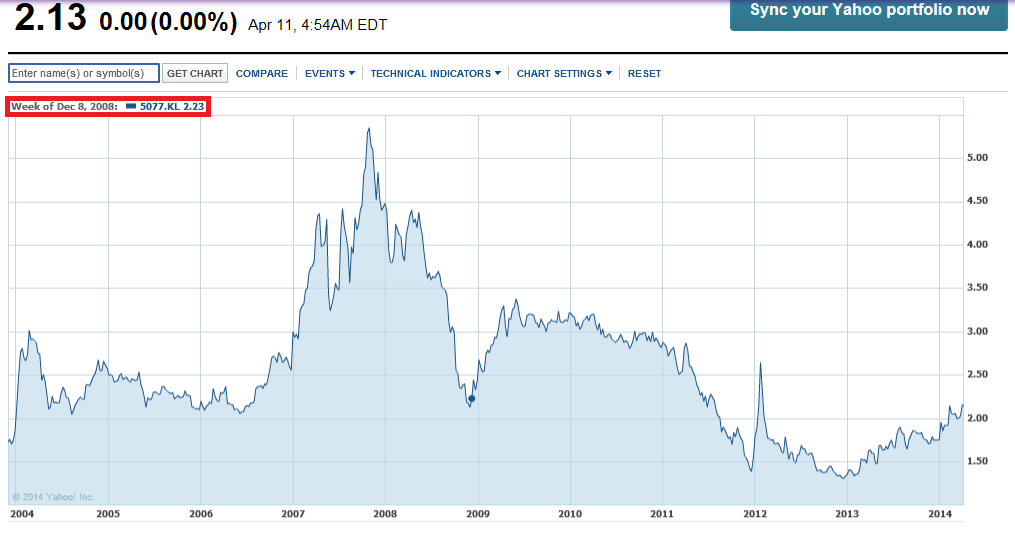 Despite the recent run-up, the share price is still below the price in December 2008.


[4] Resolution and advice are not in sink

KPMG advised the following in their report:

That does seem like a good advice, limiting the price to be subscribed to. If the price is too high, may be Maybulk should even consider selling some shares at the IPO.

But the problem with KPMG's advice is, the proposed resolution does not indicate a price, it just asks shareholders to authorise the Directors to subscribe to shares at an IPO price "to be determined", up to a maximum total amount of USD 70M: 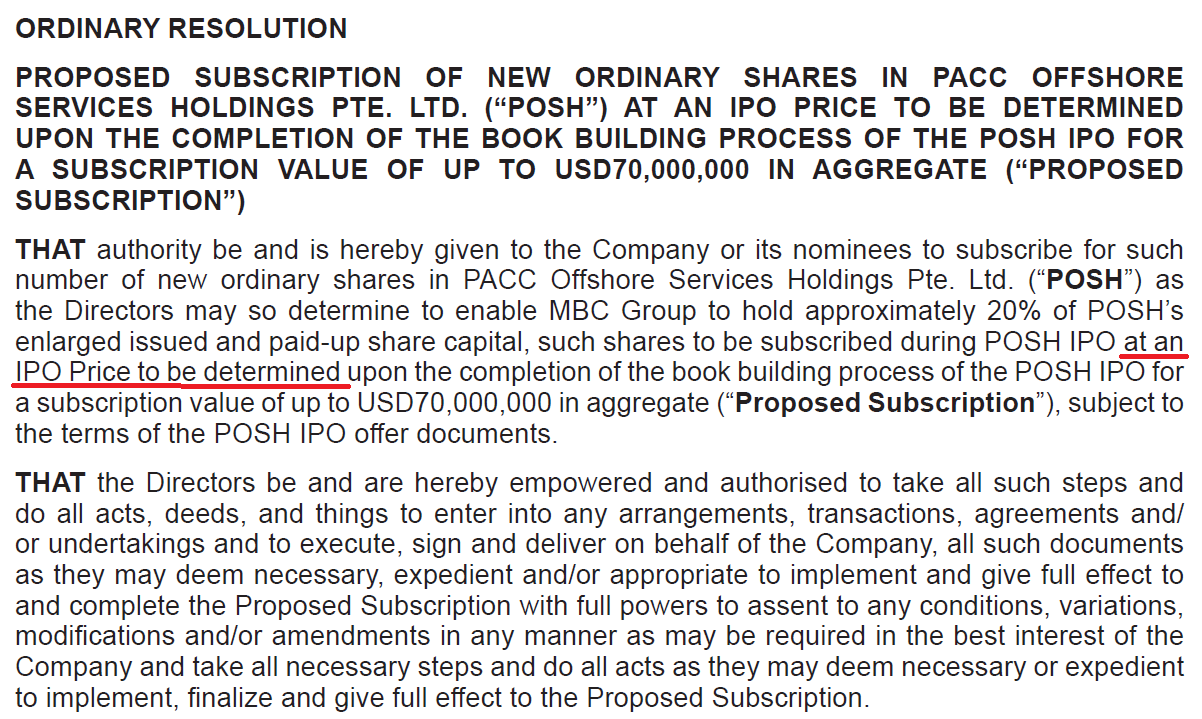 I think that the resolution should have mentioned the maximum price per share that Maybulk is prepared to pay for, and that price should have been tested by KPMG if it is "fair" and "reasonable", and if they recommend shareholders to vote in favour.

Maybulk received a Put option in 2008 which enabled them to sell the POSH shares. The good thing about that was that is was a clear exit, Maybulk would receive the cash and could for instance pay out (a part) as dividends to its shareholders.

But the company hasn't exercised that option and it even wants to maintain a 20% shareholding in POSH by buying more shares. That even has implications for the future, for instance if POSH has another rights issue, or if POSH wants to start an ESOS (Executive Share Option Scheme), in both cases Maybulk might have to buy even more shares to maintain the 20% threshold.

But that bags the question, which has not been answered so far: where is the exit? Maybulk will only receive dividends from POSH, which might not be that large. If it wants to sell shares in the market, that might be a tall order (liquidity is not guaranteed), apart from the fact that it doesn't look that great on the other shareholders if the second largest shareholder starts to sell its shares.
Posted by M.A. Wind at 20:25