To the person who approached me about High Frequency Trading: I am not exactly an expert on this subject, although I have read a quite a bit about it. 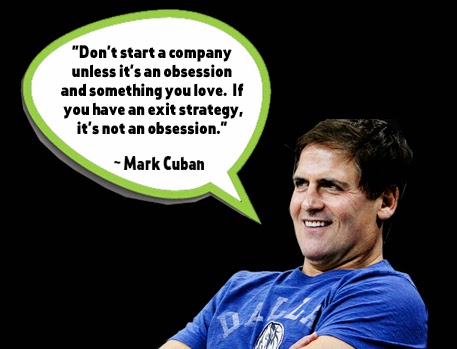 One article I just read made a lot of sense to me, it is written by Mark Cuban, one of the "sharks" of the Shark Tank.

2. Speed is not a problem
People like to look at the speed of trading as the problem. It is not. We have had a need for speed since the first stock quotes were communicated cross country via telegraph. The search for speed has been never ending. While I don't think co location and sub second trading adds value to the market, it does NOT create problems for the market.

3. There has always been a delta in speed of trading.
From the days of the aforementioned telegraph to sub millisecond trading not everyone has traded at the same speed.  You may trade stocks on a 100mbs broadband connection that is faster than your neighbours dial up connection. That delta in speed gives you faster information to news, information, research, getting quotes and getting your trades to your broker faster.
The same applies to brokers, banks and HFT. They compete to get the fastest possible speed. Again the speed is not a problem.

4. So what has changed ? What is the problem
What has changed is this. In the past people used their speed advantages to trade their own portfolios. They knew they had an advantage with faster information or placing of trades and they used it to buy and own stocks. If only for hours. That is acceptable. The market is very Darwinian. If you were able to figure out how to leverage the speed to buy and sell stocks that you took ownership of , more power to you. If you day traded  in 1999 because you could see movement in stocks faster than the guy on dial up, and you made money. More power to you.

What changed is that the exchanges both delivered information faster to those who paid for the right AND ALSO gave them the ability via order types where the faster traders were guaranteed the right to jump in front of all those who were slower (Traders feel free to challenge me on this) . Not only that, they were able to use algorithms to see activity and/or directly see quotes from all those who were even milliseconds slower.

With these changes the fastest players were now able to make money simply because they were the fastest traders.  They didn’t care what they traded. They realized they could make money on what is called Latency Arbitrage.  You make money by being the fastest and taking advantage of slower traders.

It didn’t matter what exchanges the trades were on, or if they were across exchanges. If they were faster and were able to see or anticipate the slower trades they could profit from it.
This is where the problems start.

If you have the fastest access to information and the exchanges have given you incentives to jump in front of those users and make trades by paying you for any volume you create (maker/taker), then you can use that combination to make trades that you are pretty much GUARANTEED TO MAKE A PROFIT on.

So basically, the fastest players, who have spent billions of dollars in aggregate to get the fastest possible access are using that speed to jump to the front of the trading line. They get to see , either directly or algorithmically the trades that are coming in to the market."


Please read the remaining article at the link above for more. Also the comments provide quite a few good pointers.

I would be very interested to know the exact situation both regarding Bursa and SGX. Are they allowing HFT? If so, what percentage of the trades are executed by them? To what extend can HFT players get an advantage?