Some snippets in italics, with comments by me:


"Malaysia’s energy exports are tumbling, its prime minister is battling corruption allegations and corporate profits are weakening. With all that, the Southeast Asian nation is also home to the world’s most resilient bull market for stocks."


I have written before about the weakening corporate profits.


"Sentiment remains stubbornly buoyant in Malaysia, home to some of the region’s highest dividends, as the country’s $166 billion pension fund underpins demand for equities with share purchases. Even after the FTSE Bursa Malaysia KLCI Index climbed 12 percent from a three-year low in August, it trades near the cheapest relative to global equities in almost a decade." 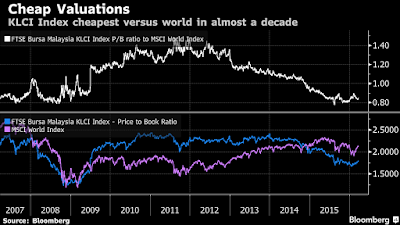 This (the support by government linked funds) sounds all quite artificial, there is clearly a lot riding on the performance of Bursa, but the question is if it is sustainable in the long term.

Article in The Edge: "Grand-Flo: Profit guarantee for Innoceria purchase revised", one snippet:


Grand-Flo Bhd, which acquired a 50% stake in property development company Innoceria Sdn Bhd last year, said the period for the RM15 million net profit guarantee provided by the vendors will be three years instead of two as initially agreed.

The vendors had guaranteed a net profit of RM10 million in 2014 and RM5 million in 2015, but both parties have now agreed to an aggregate profit guarantee of RM15 million for a three-year period from 2014 to 2016.

"This agreement was reached after reasonable consideration of the unexpected longer gestation period in the development business which was not foreseen at the time of the acquisition," said Grand-Flo in a filing with Bursa Malaysia today.


This looks like a rather good deal for the sellers of Innoceria, a profit guarantee of RM 15 Million over three years instead of over two years. Looks like a case of changing the goalposts during the game.

Why is Grand-Flo so lenient?

What exactly is the current situation, for instance the profits over 2014 and 2015 of Innoceria?

I blogged before about this subject, and am updating my spreadsheet with the new results.

All FBMKLCI 30 companies have now released their 2015 results, the updated numbers per company look like (net profits in millions of RM): 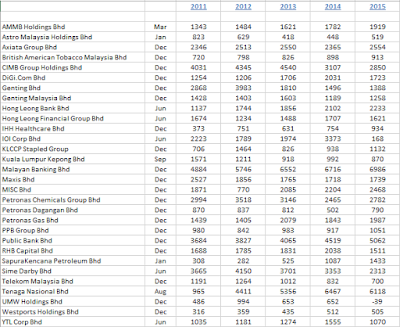 The totals and growth numbers:

All in all rather bad news, and this for the bluest of blue chips, with the Malaysian economy reportedly nicely humming along.

Eventually valuations are driven by fundamentals, if Malaysian companies want to attract foreign investors then earnings have to start growing again.


"We are confident that the medium to long-term impact will not be adverse to the Group."

In a new announcement MClean apparently changed its mind (possibly after some pressure by Bursa?):

".... the Board of Directors of MClean wishes to further inform that if in the event the claim is payable it will have an adverse financial impact to the Group."

The amount claimed by Petronas (RM 47 million) is not exactly peanuts for a smallish company like MClean, about 3.6 times the cash in hand.

Email ThisBlogThis!Share to TwitterShare to FacebookShare to Pinterest
Labels: MClean

MClean was queried by Bursa, and replied, two snippets:


The Letter of Demand [from Petronas] was received on or about 22 February 2016.

MClean did not explain why they waited one full week to inform its shareholders, to me it looks like material information, getting a letter of demand from a large corporate, the claim amount being about 3.5 times the cash in the company.


We are confident that the medium to long-term impact will not be adverse to the Group.