Xingquan, another China based counter listed on Bursa I have warned about, announced its results: 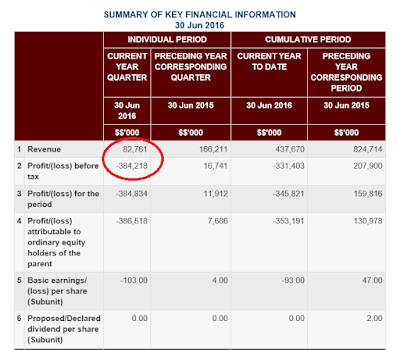 Cost of sales of RM 342 Million on Revenue of RM 83 Million, does it make any sense whatsoever?

In the past I have shown doubt about the cash in the company (why issue a rights issue when one claims to be sitting on a huge cash pile?), a few more quarter results like the above and that problem might be "solved". 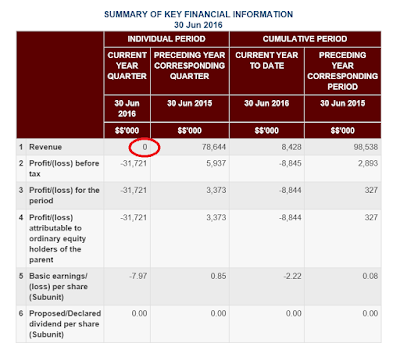 I have warned many times regarding this counter (and other China listed companies on Bursa), but zero revenue, even I am shocked, any hawker stall will do better than that.


The chief financial officer of China's PAX Global Technology has resigned, days after a video circulated on social media of him asking a Macquarie analyst to leave an earnings briefing during a heated exchange.

In a statement to the Hong Kong stock exchange late on Tuesday, PAX Global said CFO Chris Lee had stepped down due to personal reasons with immediate effect.

Earlier on Tuesday, public relations firm Financial PR issued a letter that it told Reuters came from Chris Lee that said: "I hereby express my sincere apologies again for my unprofessional behavior on 10th August. No matter what the reasons behind it were, it was unacceptable."


Shareholder activists, former analysts and hedge fund managers say there is concern that critics of companies are being muffled in the Asian financial hub amid a broader clamp down on freedom of speech.


An earnings briefing in Hong Kong turned heated when the chief financial officer refused to continue with his presentation until an analyst from Macquarie Group Ltd. left the room.

In a video obtained by Bloomberg News, PAX Global Technology Ltd. CFO Chris Lee can be seen standing over a seated Timothy Lam and ordering him to leave the conference room on Wednesday. Lam initiated coverage on PAX Global’s stock in April with an underweight rating, making him the only analyst out of 17 tracked by Bloomberg to have a bearish recommendation at the time. On Thursday, Lee said he regretted his behavior, which was a "one-off" that didn’t reflect the management’s position and he welcomes "diverse points of view," according to an e-mailed statement.

The analyst was asked to leave because PAX Global disputes parts of his report, not because of the rating, Lee said by phone on Wednesday. Lam wasn’t invited to the briefing, Lee said. Macquarie spokeswoman Ida Cheung declined to comment. All analysts should be able to attend the briefing, regardless of their view on the company, Macquarie’s Lam wrote in a note, in which he maintained his underweight rating and raised his target price by 10 H.K. cents.


It is tough to be an analyst giving an "underweight" or "sell" recommendation, but the above is rather extreme. It does however illustrate the problems of being an analyst.

Email ThisBlogThis!Share to TwitterShare to FacebookShare to Pinterest
Labels: Bloomberg

One of this blogs regular contributors send me some very helpful comments including a screenshot of the recommendations by the analyst (Ivy Ng from CIMB) as displayed on the Bloomberg terminal.

This does bring a lot of perspective to the story of yesterday.

The share price of Felda plus all the buy/hold/sell recommendations:

First of all a lot of "hold" recommendations starting in August 2012 (the report I linked to yesterday was probably the first research report) until August 2014. At that moment the stock has fallen to about RM 4, so the recommendations so far were not exactly great.

But then, the analyst changed her mind to a "sell", and that looks a good call since the share did drop to about RM 3.

Then things turn rather strange, while the share continues to slide all the way down to the RM 1.50 level, recommendations change from "sell" to "hold" to "sell" to "hold" back to "sell" again. There might be some reason for this (possibly an internal rule in CIMB), but I am not aware of that.

Then somewhere in April 2016 at a price of about RM 1.50 the analyst changes from "sell" to "buy" and at this moment (with hindsight and with the price currently at RM 1.93) that looks like a rather good call.

Rather remarkable, if I might add, seven different recommendations for a four year period.

Regarding the initial "hold" call and the rather high target price of RM 5.05 about which I wrote yesterday: CIMB was one of the brokers supporting the IPO, according to this article:


Given this, it would have been "near impossible" for an analyst of CIMB to issue a "sell" recommendation.

It is of course a clear conflict of interest situation, and some of that might be found in the disclaimer attached to the report, but it is all rather vaguely described.

I would have preferred that it would have been clearly explained on the first page of the research report.

Regarding "Ng, who is top ranked and has returned 63% for her call on Felda, has the only buy call out of 14 analyst recommendations, according to Bloomberg data": Bloomberg tracks the one year return of a stock assuming an investor followed the recommendations over that period.

I think that is a rather limited tracking of performance, especially if an analyst has followed a company for much longer and had issued many recommendations in the past.

Anyhow, things do look markedly better than I initially thought, I was not aware that the analyst had indeed turned negative somewhere in 2014.

Email ThisBlogThis!Share to TwitterShare to FacebookShare to Pinterest
Labels: conflict of interest, Felda

Article in The Edge, attributed to Bloomberg, one snippet:


The company has a lot of potential to unlock and its share price is attractive, Ivy Ng, an analyst at CIMB Bank Bhd said in a July 31 report. Ng, who is top ranked and has returned 63% for her call on Felda, has the only buy call out of 14 analyst recommendations, according to Bloomberg data.


I have never written much about Felda, to me it looks more like a (partially) political play with a (strong) social element involved, not exactly a market-driven, commercial company that one would expect to find on Bursa (Bursa apparently thinks differently about this).

However, an analyst who is top ranked and has returned 63% on this stock, that does draw my attention.

With the help of Google I found the following report (dated August 6, 2012) written by the same analyst, conveniently archived by i3Investor: 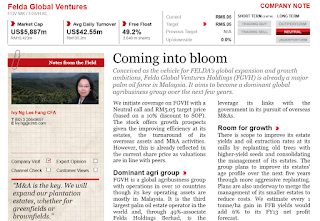 A 93-page (!) research report with terms like "Coming into bloom", "Dominant agri group", "Room for growth", "M&A is the key", that sounds all rather optimistic with hindsight.

In other words, investors who bought based on that target price in 2012 are sitting on a loss of 62% (excluding dividends but also excluding costs) over a timespan of exactly four years instead of a profit of 63%.

Is it possible that Bloomberg only checked the latest recommendation (possibly a few months old) from this analyst?

Probably, but I don't think that would be the right thing to do.

Email ThisBlogThis!Share to TwitterShare to FacebookShare to Pinterest
Labels: Felda

Maxwell published its annual report and The Star wrote an article about it:


"Li noted that the group had a huge cash reserve of RM366.7mil as at the end of last year.

This, she said, allowed the group to look out for potential business opportunities and to expand beyond the core sports shoes OEM (original equipment manufacturer) and ODM (original design manufacturer) businesses."


Sounds all pretty good, doesn't it?

Unless one realizes that Maxwell's accounts were qualified by the auditors, a "tiny" oversight that the article forgot to mention.

The auditors needed a full eight pages to detail what was wrong, one of the worst lists I have seen for Bursa listed companies.

One of the auditors concerns is exactly the "huge cash reserve" as mentioned by Madam Li:

But unfortunately, it is not all.

The loss over 2015 was much larger (31%) than previously stated, as announced here.

Seven reasons were given, with one rather remarkable one, the salary of Madam Li herself. Apparently it was not known on February 29, 2016 what amount she would receive over 2015? 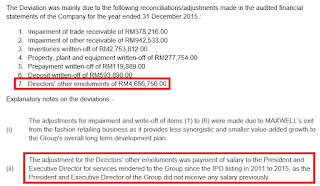 The remuneration committee should give a proper explanation regarding this matter.

Another matter is that the company has now entered PN17 status.

And then there are still many other concerns about which I have written before.

Malaysian journalists should really put in their effort, do some thorough research before they write about a subject. The above linked article is very disappointing and would leave an uninformed reader with a completely wrong impression about the well being of Maxwell.