Utusan Melayu (Malaysia) announced that it is selling its stake in Maqamad Sdn Bhd for RM 48 Million. It had bought this stake eight months before for only RM 100K.


"What about the possibility that Utusan has been harbouring the Malaysian answer to Warren Buffett all this while? Possible, possible… the possibilities are endless. Numbers don’t lie and Utusan really is selling what it says was worth RM100,000 eight months ago for RM48 million now.

With an investment manager able to pick out an investment giving 47,900% in returns within an eight-month timeframe lurking in our midst, perhaps Khazanah Nasional extended the contract of its managing director Azman Mokhtar a tad too hastily, eh?"


Details are scant, understandably so, why would any fund manager give away his secrets? Transparency is of course for softies, while corporate governance, honestly, who cares with RM 48 Million cash in the bank?

Warren Buffett's record on Berkshire Hathaway is definitely not bad, increasing the share price from USD 13 to about USD 200,000. But that took a full fifty years, who has so much patience?

Buffett's track record shows an annualized return of about 21% per year, while Utusan scored 47,900% in only eight months time. Now we are talking business ......

BFM interview with James Hay from the Pangolin Fund.

Some of the subjects:
An earlier interview with Hay can be found here.

Maybulk: large paperlosses on its investment in POSH (4)

There are some indications that the above might (finally) happen, at least to some degree. 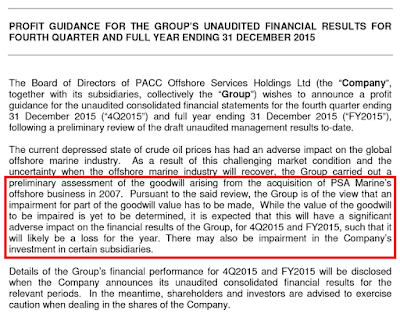 That will not give any consolation to current shareholders in any of these two companies, especially since the normal operations of both companies will be rather bad, due to the current economic environment in both the shipping and oil & gas industry. For the shareholders it will be a case of "when it rains, it pours".

But after the impairments the balance sheet of both companies will give at least a somewhat more realistic picture, something that was overdue for quite some time.

I wrote before about Avestra Asset Management and its curious relationship with 1MDB (here and here).

The Australian published today an article "Court shuts Avestra schemes linked to 1MDB crisis" on its website that seems relevant.

Judge Jonathan Beach made the orders after reading a report from provisional liquidators that found undisclosed related-party transactions, 13 potential breaches of corporate law and failure to invest according to the fund’s individual mandates.

The report, compiled by Simon Wallace-Smith and Richard Hughes of Deloitte and released to The Australian by the court, also reveals that a Cayman Islands vehicle linked to the 1MDB scandal is the owner of the Avestra Credit Fund, which backed a takeover bid against Malaysian company Harvest Court Industries.

Cooking the books can only last 2 years

Interesting article in The Economist "How companies massage their profits to beat market forecasts", some snippets:


Executives have every incentive to match or beat forecasts as the market punishes those that fail to do so. That, in turn, hurts the value of the share options which are the best hope of making the executives rich.

A recent academic paper looks in detail at this process (The Valuation Premium for a String of Positive Earnings Surprises: The Role of Earnings Manipulation by Jenny Chu, Patricia Dechow, Kai Wai Hui and Annika Yu Wang). As the authors point out, it is hard to know whether the ability of the corporate sector to beat forecasts is due to good management, a growing economy or outright manipulation. So they focus on companies that the SEC has identified as indulging in manipulation.

Sure enough they find that 53% of such firms have a record of four straight quarters of beating forecasts, compared with just 43% of all firms. Secondly, they find that firms tend to indulge in earnings manipulation when they already have a high stock market multiple; they are trying to prop up their share price, not inflate it. The average price-earnings ratio during the manipulation period is 35.

Third, they find that 42% of manipulating firms beat profits for eight quarters, compared with 32% of all firms. After that, the difference is not statistically significant. So two years seems to be the limit for cooking the books. And fourth, they find that executives focus more on beating forecasts than on beating last year's numbers.


The link to the research paper can be found here.
Posted by M.A. Wind at 21:18 No comments:

Email ThisBlogThis!Share to TwitterShare to FacebookShare to Pinterest
Labels: cooking the books, Financial Irregularities, The Economist

Unfortunately, Malaysia features in the Top 10: 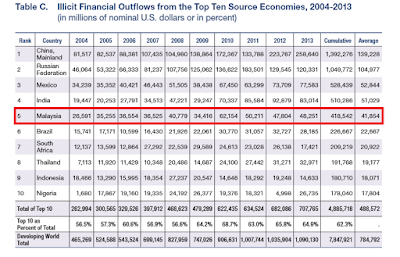 Things get even worse when we take the size of the population in consideration, on a per capita basis Malaysia might even top the list. Not something to be proud of.

The list uses data until 2013. I hope that things have improved since, but taking into consideration how recent developments have been going, I have some strong doubts.

Announcement by the Malaysian Securities Commission:

Audit Oversight Board Revokes Registration of Auditor for the First Time

The Audit Oversight Board (AOB) has revoked the registration of an audit firm Wong Weng Foo & Co along with the Managing Partner, Wong Weng Foo and its Partner, Abdul Halim Husin effective from 2 December 2015.

The revocation is under section 31Q(1)(a)(B) of the Securities Commission Malaysia Act 1993 (SCMA) for failure to remain fit and proper to audit public interest entities.

The SCMA gives AOB the power to revoke the registration of an auditor if the auditor contravenes condition of registrations imposed by the AOB under section 31O(3) of the SCMA.

Wong Weng Foo & Co, Wong Weng Foo and Abdul Halim Husin were found to have failed to comply with auditing standards in the engagement performance of two public listed entities. In addition, Wong Weng Foo & Co failed to carry out the practice honestly, competently and with due care when it failed to implement the remedial action as reported to AOB in respect of past inspection findings.

Wong Weng Foo & Co also failed to ensure that the person who audits the financial statement of a public listed entity on behalf of the audit firm is appropriately qualified, sufficiently trained and competent.


Announcement by the US Securities and Exchange Commission:

The Securities and Exchange Commission today announced that national audit firm Grant Thornton LLP and two of its partners agreed to settle charges that they ignored red flags and fraud risks while conducting deficient audits of two publicly traded companies that wound up facing SEC enforcement actions for improper accounting and other violations.

Grant Thornton admitted wrongdoing and agreed to forfeit approximately $1.5 million in audit fees and interest plus pay a $3 million penalty.


Pretty similar announcements, one could say, but there are some crucial differences.

The US announcement does name the listed companies, the Malaysian (unfortunately) not. In the latter case the shareholders of the companies involved do not know what happened to the audits, if the management was involved, if any action has to be taken.

Also, there is a very detailed description given in the US case (please visit this website for more information including some links), but not in the Malaysian case.

It is good that some enforcement has been meted out by the Securities Commission, but more information what exactly happened would be helpful.