There is a lot going on in the fintech world and while I am hesitant about certain directions (I am definitely not convinced about digital currencies like bitcoin), I do agree that I might simply be wrong (some would say: "too old to understand this").

One new direction of fintech is regarding robot programs that place automatically trades based on programs provided and certain parameters that the user chooses. My eye caught the following announcement on TechInAsia's website:

Everyman securities trading platform AlgoMerchant will officially launch this month after raising more than US$2 million in funding from East Ventures and a “network of prominent individuals in the fund management and broking industry.”

The Singapore-based startup offers a range of robo-traders that allow investors of all shades – from part-time retail investors to professionals and high-net-worth individuals – to automate securities trading through their personal trading accounts.

The robo-traders use data analytics and machine learning tech to automate trading, while also avoiding delays and human error. The basic service is free, while a range of premium packages can be paid for.

AlgoMerchant said it collaborates with freelance quantitative traders  – in other words, those that specialize in automated trading – and data scientists from around the world to discover profitable investment algorithms. More than 1,000 traders tested out the service during its nine-month beta phase.


So far so good, it definitely sounds interesting.

But I almost dropped out of my chair when I read the following:

The startup claims that its bots can give everyday retail investors “an edge similar to resource-rich top quantitative hedge funds,” securing projected annual returns of over 40 percent.

Annual, consistent returns of over 40 percent are simply from another world. Even Warren Buffets returns would pale in comparison to those.

But worrisome, there is no basis whatsoever given in the article for these kind of returns, it looks like they are plucked from the sky.

On the company's website the only thing I can find regarding returns is this:


The majority of retail investors’ portfolios follow the returns of the market. AlgoMerchant’s strategies, however, are alpha-seeking and target upwards of 20% per annum.


Suddenly the "over 40 percent returns" has changed into "upwards of 20% per annum".

The graph supporting these claims is as follows: 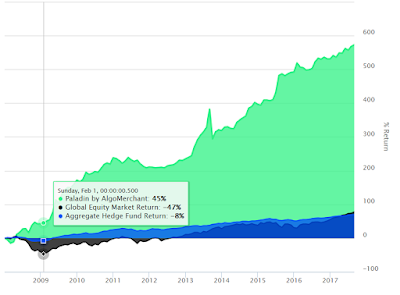 
My guess is that these hypothetical results are derived from optimising on the data itself, causing over optimisation (especially given the rather unique circumstances of the last ten years), and thus generating much too rosy projections of future returns.